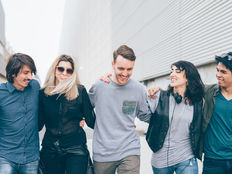 Consumer spending is a vital driver of the U.S. economy and while there have been challenges to that scenario this year, the consumer is proving surprisingly resilient. That could highlight the case for the Principal Millennials Index ETF (GENY ).

GENY tracks the Nasdaq Global Millennial Opportunity Index. This index seeks to capture the global spending and lifestyle activities of the largest generation ever, offering exposure to brand name companies specializing in social media, digital media, technology, healthy lifestyles, travel, and leisure. The companies will evolve over time as the spending patterns of millennials change as they age.

E-commerce, an industry to which GENY features robust exposure, is one factor supporting consumer spending this year.

“Online commerce continues to surge while the pickup in consumer spending has broadened to include more traditional categories, notably autos and housing,” according to BlackRock research. “As spending has rebounded so have consumer stocks. Third-quarter gains in the global consumer discretionary sector have been led by internet commerce companies, but other industries have also rallied.”

Millennials For The Near-Term?

With the U.S. economy showing some signs of life and with the holiday shopping season here, considering consumer cyclical stocks over the near-term could be a winning idea.

The reason GENY merits a place in the conversation about a cyclical rotation is simple. Consumer discretionary is one of the four cyclical sectors and GENY allocates 37.26% of its weight to that group, according to issuer data. That’s more than triple the S&P 500’s weight to that sector. Lower household debt also bolsters the case for GENY.

“Household debt as a percentage of disposable income remains at a 20-year low while debt servicing costs have never been lower. Meanwhile, net worth is supported by both a rising stock market and a housing rebound,” according to BlackRock.

Recent data points indicate there are opportunities in the consumer discretionary and housing sectors. The sector is one offering investors more gains. Recent performers that stood out have also been those that were previously hardest hit by the coronavirus-driven fallout in the markets.

“The unemployment rate fell from a peak of 14.7% in June to 7.9% in September. While we believe that the labor market is going to heal slowly from here, the snapback in the last 3 months has been very strong,” notes BlackRock.