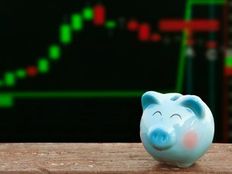 Bank Stocks Are Quite Cheap

However, that historical precedent isn’t holding true to form this year even as the Federal Reserve has unleashed three rate hikes in the first half of 2022, indicating that assets such as the Invesco KBW Bank ETF (KBWB B) are being dragged lower by broader market weakness.

However, the case for bank stocks isn’t dead. In fact, there are some positive catalysts to consider, including deeply discounted valuations and balance sheet strength.

Regarding the latter point, KBWB components easily passed the Federal Reserve’s recent stress tests, and as such, many of the fund’s holdings, with some exceptions, announced significant increases to quarterly dividends. KBWB, which tracks the KBW Nasdaq Bank Index, sports a dividend yield of 3.06%, as of June 29. Then there’s the valuation case.

“Investors have been selling U.S. bank stocks as fears of a potential recession have sent share prices plummeting. Yet the fundamentals behind their businesses signal that investors’ worries may have swung too far to the negative, leaving many companies at a discount,” wrote Morningstar analyst Jakir Hossain.

Recession fears, which often stoke speculation that banks will have to set aside capital to cover sour loans, are weighing on KBWB components this year. On the other hand, Morningstar says that several of the ETF’s member firms that are wide moat banks are now undervalued. That group includes Wells Fargo (NYSE:WFC), which is the ETF’s third-largest holding.

“Despite the bank’s issues, Wells Fargo remains one of the top deposit gatherers in the U.S., with the third most deposits in the country behind JPMorgan Chase and Bank of America. Wells Fargo has one of the largest branch footprints in the U.S., excels in the middle-market commercial space, and has a large advisory network,” said Morningstar analyst Eric Compton.

Speaking of Bank of America (NYSE:BAC) and Dow component JPMorgan Chase (NYSE:JPM), those stocks also appear on the Morningstar wide moat undervalued bank list, and they combine for 15.55% of KBWB’s portfolio.

“JPMorgan Chase is arguably the most dominant bank in the United States. With leading investment bank, commercial bank, credit card, retail bank, and asset and wealth management franchises, JPMorgan is truly a force to be reckoned with,” added Compton.

USBancorp (NYSE:USB), which is KBWB’s second-largest holding at a weight of 7.88%, is the other bank on the Morningstar list.