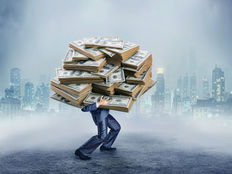 Big Banks Sitting on an Enormous Pile of Cash. What Gives?

The Invesco KBW Bank ETF (KBWB C+) is higher by 16.26% over the past month, awakening from a lengthy slumber. That rally could be the start of something more substantial if analysts’ increasingly bullish views on bank stocks prove accurate.

A catalyst for KBWB is that some of its marquee components are sitting on massive amounts of cash previously set aside to cover sour loans. If the economy improves and default rates remain low, that cash can be converted back into per share earnings.

“The four biggest U.S. banks – JPMorgan Chase, Bank of America, Citigroup and Wells Fargo – have amassed a nearly $100 billion pile of cash for loan loss reserves as of the third quarter. The broader industry has created its largest collective reserve since 2010, when mortgage defaults sparked a recession that required massive bailouts of banks and other companies,” reports Hugh Son for CNBC.

Things Looking Up for Big Banks

The problem with banks setting aside large chunks of cash to cover bad loans is that the strategy weighs on earnings. Those reserves come directly out of profits, but if the economy improves, KBWB holdings may not need to cover as many bad loans as expected, meaning those reserves could eventually be turned into profits.

Some analysts believe bank stock performance is about to take a turn for the better after falling behind amid pandemic-induced revenue concerns due to low interest rates and weak loan growth, along with credit concerns. Plus, there are some near-term catalysts for KBWB and friends, including solid credit quality.

“But the story may end differently this time. A combination of factors – promising vaccines that should enable a U.S. economic reopening, surprisingly resilient bank customers and the expectation that lawmakers will approve another round of stimulus – should allow banks to begin releasing reserves in the second half of 2021, according to five bank analysts surveyed by CNBC,” reports Son.

KBWB is slightly higher over the past week and is residing near its highest levels since March.