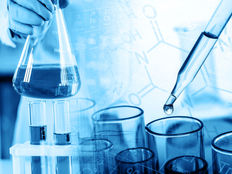 The biotechnology industry is a bifurcated space. In one corner, you have nascent, small-cap companies that don’t yet have steady revenue streams because their new drug or treatment is still in development, hasn’t received FDA approval, or hasn’t been in the market long enough to establish a proven track record. In the other corner, you have the large-cap companies with established reputations and steady revenue streams. The former group is speculative, while the latter is more stable.

This gulf between the startups and established names has widened further due to the flurry of IPOs that have entered the biotech market in the past two years. So, it’s important that any index tracking the biotech industry be market-weighted to acknowledge the difference between the startup companies that don’t yet have stable revenue streams and the long-standing larger companies that do. But as Nasdaq Investment Intelligence senior index specialist Mark Marex notes, the S&P Biotechnology Select Industry Index doesn’t acknowledge this disparity through its equal-weighted approach.

“There’s this dichotomy within the industry,” said Marex, adding: “There’s a different level of risk and return with the larger names, so if you want to be properly benchmarking the industry, there’s no reason to be weighting those names equally with the speculative small-cap names.”

While the S&P’s biotech index isn’t cap-weighted, the Nasdaq Biotechnology Index uses a modified cap-weighted methodology composed of securities of Nasdaq-listed companies classified as either biotechnology or pharmaceuticals.

The Nasdaq Biotech Index has included many new biotech names with greater exposure to small- and mid-cap names, but the benchmark is still heavily weighted toward more established names. The top 10 largest components still represent nearly half of the overall index weight after dipping from 50.4% pre-reconstitution to 46.8% immediately after.

According to Marex, this cap-weighted methodology makes more sense. “If you want benchmark exposure in a sector like finance, you want more of your exposure to J.P. Morgan and Goldman Sachs than Main Street Bank of Oregon. That’s a natural, logical approach,” Marex said.

While Marex acknowledges that some investors do want to be speculative, ultimately, he doesn’t see that as being what most investors are looking for when seeking benchmark exposure within the biotech industry.

“It just doesn’t make any sense for an industry that’s been around for four decades,” Marex added.