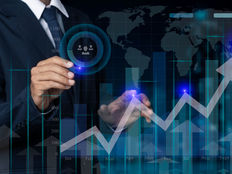 Cloud Computing M&A Could Heat Up

Some market observers are saying that consolidation in the cloud computing arena will heat up this year, and signs are abundant that this prediction could prove accurate.

SKYY’s utility as a play on cloud computing mergers and acquisitions activity is already on display. On Sunday, Cara Lombardo for the Wall Street Journal that Elliott Management Corp’s private-equity arm, Evergreen Coast Capital, and Vista Equity Partners are close to a deal to take Citrix Systems (NASDAQ:CTXS) private in a transaction valuing the software company at nearly $13 billion.

“Based in Austin, Texas, Vista is a pioneer in software investing and manages more than $86 billion in assets. Its chief executive, Robert Smith, founded Vista in 2000,” according to the Journal. “Citrix is expected to be combined with Tibco, a software company Vista already owns, some of the people said.”

The possibility of Citrix being taken over is relevant to SKYY investors because, as of January 27, that stock is the ETF’s seventh-largest holding at a weight of 3.56%. However, there’s more to the potential potency of the SKYY consolidation story. Take the case of Splunk (NASDAQ:SPLK), which some investors believe is now inexpensive enough to draw a buyout offer.

“Cisco could be a buyer for Splunk, especially if the company isn’t able to step up its execution this year," RBC Capital Markets analyst Matthew Hedberg told Business Insider. “The two companies have a strategic partnership where Splunk’s products run on Cisco hardware.”

Cisco Systems (NASDAQ:CSCO) and Splunk combine for 4.75% of SKYY’s roster. Box (NYSE:BOX) and Smartsheet (NASDAQ:SMAR) are two more of SKYY’s 67 holdings that some analysts believe could be credible takeover targets. Those stocks combine for 1.34% of the ETF’s roster.

Cloud computing mergers and acquisitions activity could also result in some bigger names becoming targets. That could include DocuSign (NASDAQ:DOCU) and Zoom Communications (NASDAQ:ZM). Futurum analyst Dan Newman told Business Insider that some big names could go after those two companies.

“With the gap in its business-software portfolio, Amazon has the resources and motivation to buy the $41.58 billion company (Zoom),” Newman said. “Amazon’s own videoconferencing software, Chime, hasn’t seen the same mainstream success as Slack and Microsoft’s Teams app, which Newman called ‘the uncontested giant’ in communications software.”

Microsoft (NASDAQ:MSFT) and Amazon (NASDAQ:AMZN) combine for over 7% of SKYY’s roster, while Zoom and DocuSign combine for just under 1%.