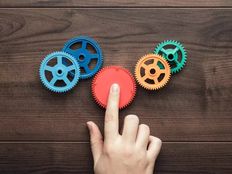 Dividend Growth ETFs Are Clutch for This Environment

Broader equity benchmarks are sliding through the first four months of 2022, and that could be a sign that investors may want to brace for more subdued returns going forward.

In environments like that, investors can survive and thrive with dividend growth stocks. Fortunately, they don’t have to stock-pick because several exchange traded funds, including the Invesco Dividend Achievers ETF (PFM A-), focus on companies with enviable records of boosting payouts.

Bank of America strategists “say that the S&P 500 is poised for minimal price returns from here, and that dividends could make a big difference. Since 1936, they’ve made up more than one-third of total returns,” reports Jack Hough for Barron’s.

“Payouts as a percentage of profits are near record lows, suggesting ample potential for dividend hikes,” according to Barron’s.

The $718.5 million PFM’s 12-month distribution rate is 1.92%. While that’s well ahead of the dividend yield on the S&P 500, PFM’s distribution rate isn’t so high as to be a cause for concern. In fact, many of PFM’s 375 holdings have the resources to continue boosting payouts for years to come. Consider semiconductor firm Broadcom (NASDAQ:AVGO).

“The stock has returned more than 2,000% over the past decade. That might not seem like the description of an income investment, but the shares pay 2.8%. With free cash flow approaching 7% of the company’s market value, payments appear well-covered. Broadcom announced a 14% payment boost in December,” according to Barron’s.

Other companies with stout dividend growth potential highlighted by Barron’s include Dow components Caterpillar (NYSE:CAT) and Merck (NYSE:MRK) as well as Fifth Third Bancorp (NASDAQ:FITB) and Hewlett Packard (NYSE:HPQ). All four of those stocks are members of the PFM portfolio. Specific to HP, Warren Buffett’s Berkshire Hathaway recently took a stake in that tech company. The company has a free cash flow yield of 12%, indicating that it can commit capital to shareholder rewards.