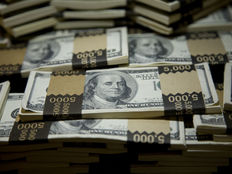 How Loan Loss Reserves Can Light Up Banking ETFs

An important factor in the 2021 case for funds such as KBWB is the release of cash set aside last year to cover bad loans.

“In the coming months, banks are expected to free up tens of billions of dollars in reserves they set aside to cover soured loans—losses that still haven’t materialized a year into a pandemic that shut down swaths of the U.S. economy,” reports David Benoit for the Wall Street Journal. “In 2020, banks rushed to build up their stockpiles to cover losses on the assumption that consumers and businesses would default on their loans after government stimulus ran out. U.S. banks had $236.6 billion in total reserves in December, according to the Federal Deposit Insurance Corp., nearly double their level from before the coronavirus upended the economy and sent unemployment up sharply.”

A Big Influx of Cash Is Coming

The problem with banks setting aside large chunks of cash to cover bad loans is that the strategy weighs on earnings. Those reserves come directly out of profits, but if the economy improves, KBWB holdings may not need to cover as many bad loans as expected, meaning those reserves will eventually be turned into profits.

“Banks set their loan-loss expectations using broad economic gauges, particularly gross domestic product and unemployment rates. From that starting point, they factor in hundreds of other variables, with some leeway built in for how optimistic or pessimistic executives feel,” adds the Journal. “Since the start of the pandemic, bank executives have tended toward pessimism when setting aside loan-loss reserves. As a result, their internal models offer a more muted outlook than broader economic forecasts.”