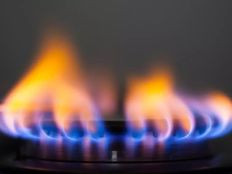 Along with oil, natural gas is one of this year’s best-performing commodities, which makes sense because the ongoing Russia-instigated conflict in Ukraine is exposing the vulnerabilities of Europe’s long-running dependence on Russian fuel.

As is the case with oil stocks, natural gas equities are enjoying the bounce in the underlying commodity’s price in 2021. Just look at the First Trust Natural Gas ETF (FCG C+). FCG, which tracks the ISE-Revere Natural Gas Index, rallied to a new 52-week high last Friday, posting a 13% gain for the week.

As of March 4, the $645.4 million exchange traded fund is up almost 36% year-to-date. Some experts believe that some FCG components could enjoy more upside, particularly if the U.S. boosts natural gas exports to Europe.

“The U.S. is exporting about 10% of its daily output as liquefied natural gas. More of that LNG is likely to go to Europe as customers there shun Russian gas. In January, U.S. exports of LNG to Europe topped Russian pipeline volumes there for the first time. As new facilities are built, LNG exports from the U.S. are projected to rise by as much as 50% by 2027,” reports Andrew Bary for Barron’s.

FCG, which is just two months shy of its 15th birthday, is home to 43 stocks, including some that are benefiting from geopolitical tensions and high natural gas prices.

“In the U.S., meanwhile, overall gas demand is expected to rise 10% by 2025. according to the U.S. Energy Information Administration. Producers like EQT (ticker: EQT), Chesapeake Energy (CHK), and Coterra Energy (CTRA) stand to benefit. While their stocks have risen lately, their ample free cash flow, strong or rapidly improving balance sheets, and higher capital returns to shareholders make them still look attractive,” according to Barron’s.

Coterra Energy and EQT combine for 6.54% of FCG’s roster, while Chesapeake Energy commands a weight of 2.9%.

Antero Resources (AR), Range Resources (NYSE:RRC), and Southwestern Energy (NYSE:SWN) are also among the FCG components that could have more upside ahead. That trio combines for over 8% of FCG’s weight.

Southwestern Energy “whose shares trade around $5, has been the worst performer in the group in the past year. This reflects acquisitions and a relatively high debt load. It’s also about 75% hedged on its gas output for 2022. Yet it trades cheaply with a projected 25% free-cash-flow yield this year,” notes Barron’s.