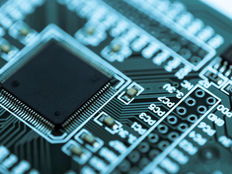 Some SOXQ Components Are Abruptly Inexpensive

Technology stocks are rarely inexpensive, and that sentiment also applies to the semiconductor industry, but a recent pullback in the group has some chip stocks trading at attractive multiples.

That could prove to be good news for investors considering exchange traded funds like the Invesco PHLX Semiconductor ETF (SOXQ B+). SOXQ, which debuted last June, tracks the PHLX SOX Semiconductor Sector Index, which is one of the most venerable gauges of chip stocks.

SOXQ is home to 30 stocks, several of which are being highlighted by analysts as now sporting compelling multiples. That includes Taiwan Semiconductor (NYSE:TSM), which operates one of the world’s largest semiconductor foundries.

Advanced Micro Devices (NASDAQ:AMD) and Nvidia (NASDAQ:NVDA) combine for more than 13% of SOXQ’s weight. Taiwan Semiconductor accounts for 4.64% of the ETF’s roster. Adding to the allure of the chip foundry operator is the fact that it’s expanding capacity in significant fashion with the aim of helping reduce the global chip shortage.

“Lam Research specializes in producing equipment used to manufacture semiconductors. Supply chain constraints cut into the company’s fourth quarter profits, according to management. While sales were up 22% year-over-year, they were down 2% from the previous quarter. The company’s management and Morningstar tech strategist Abhinav Davuluri expect demand for equipment in 2022 to remain robust,” says Hossain.

Teradyne “management also announced that sales would be down in 2022 due to a delay at TSM for it’s 3-nanometer node. As a result, investors have sent shares sliding 30.2% since the beginning of the year. Despite this, analyst William Kerwin still sees the company as highly attractive, trading at a 34% discount,” concludes Hossain.

Lam Research and Teradyne combine for more than 5% of SOXQ’s weight.