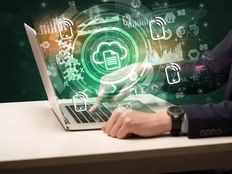 Growth stocks are struggling, and the technology names are a big reason why that’s the case. Over the course of 2022, some market observers noted that one of the culprits is frothy valuations on some cloud computing stocks.

While that is true, some large- and mega-cap tech names that aren’t dedicated cloud firms but are major players in the space that are showing surprising resilience on the earnings front, relatively speaking. That could be a positive for exchange traded funds such as the First Trust ISE Cloud Computing Index Fund (SKYY B).

SKYY follows the ISE CTA Cloud Computing Index, and the median market value of its 71 components is $18.47 billion, confirming that it’s not dependent on mega-caps. Still, there are some favorable traits with SKYY.

“The practice of running computing applications remotely for clients, in football field-sized data centers, is booming. That trend continued in the first quarter, with Amazon, Google parent Alphabet and Microsoft all reporting higher-than-expected cloud revenue, and it demonstrated the advantage of diversifying away from consumer-oriented businesses,” reports Jordan Novet for CNBC.

Regarding Amazon, its Amazon Web Services (AWS) is the largest cloud computing firm, and it saw revenue grow 37% in the first quarter.

“Even if consumer demand slackens, Amazon’s cloud business is more profitable than ever before, showing operating profits of $6.52 billion, up 57% from a year ago,” according to CNBC.

Microsoft’s Azure is that company’s rival to AWS, a complement to the Office 365 suite that is growing at a rapid rate.

Google parent Alphabet has a burgeoning cloud computing arm of its own, and while it isn’t yet profitable, revenue is soaring, and it provides an avenue for offsetting some of the risk stemming from a decline in digital advertising.

“We are scaling up, particularly in our go-to-market as well, and I think that will play out well,” said Alphabet CEO Sundar Pichai on the company’s recent earnings conference call. “And over time as we focus on converting bookings to consumption as well, I think it will play out well, taking a long-run view and methodically scaling up and executing better.”

In order, Microsoft, Amazon, and Alphabet combine for 10.4% of SKYY’s weight. Other large-cap names in the ETF include Oracle (NYSE:ORCL) and Cisco Systems (NASDAQ:CSCO).