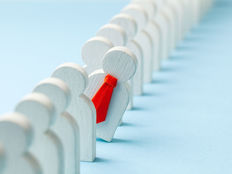 The vast majority of passive equity-based exchange traded funds are weighted by market capitalization. The universe of equal-weight ETFs is well-populated, but significantly smaller.

Among equal-weight ETFs, the Invesco S&P 500® Equal Weight ETF (RSP A-) is the largest, and while equal-weight ETFs aren’t exclusive, per se, choosy investors can find a lot to like with funds such as RSP. In fact, some experts argue that if investors are fully informed that there are legitimate alternatives to cap-weighting, they might be apt to embrace equal-weight funds.

“Equal weighting is generally considered to be the most obvious and straightforward alternative to market capitalisation weighting an index. The rules and factors which are explicit in equally weighted indices effectively reverse rules, factor exposures and potential issues which are embedded implicitly in market capitalisation weighted indices,” writes Chris Taylor, global head of Tempo Structured Products, for ETFStream.

One way of looking at that sentiment is that while cap-weighted indexes dominate the index fund universe, including ETFs, that doesn’t mean that weighting by market capitalization always delivers the best outcomes for investors.

As Taylor notes, one of the reasons that so many investors of all skill levels embrace cap-weighting is that it’s viewed as an efficient method that draws on the market’s collective wisdom.

Cap-weighed benchmarks “draw attention to the efficient markets hypothesis, which loosely states that markets are efficient; everything is in the price; the only thing that can move prices is unknown information, and that consistently beating markets is impossible … which they suggest highlights the merits of market capitalisation weighting,” Taylor adds.

However, Taylor also highlights the virtues of equal-weight funds, including reduced concentration, more exposure to smaller companies, and an aversion to the purchasing of stocks as they’re rising, which is what cap-weighed funds do.

For its part, RSP doesn’t allocate more than 0.31% of its weight to any of its holdings, and while it’s not a small stock ETF, large-cap equities combine for just about 42% of the fund’s roster. Additionally, there’s often talk about equal-weight’s intersection with the value factor.

“The other key factor at work is the ‘value’ factor. In an equal weight index, re-balancing imposes a ‘buy low/sell high’ rule, which captures elements of value,” according to Taylor. “Over recent years there’s plentiful evidence that value investing has been out of favour, while growth stocks have driven the performance of certain stock market indices. However, academia identifies the potential merits of value investing.”

RSP allocates almost 37% of its weight to value stocks and has a track record of beating cap-weighed large-cap value indexes.