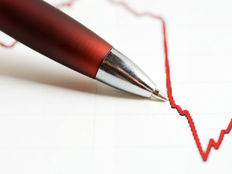 Shares of Meta Platforms (FB) plummeted over 25% as trading commenced on Thursday morning, following its Wednesday Q4 earnings report in which the firm missed on earnings per share and posted a negative outlook for Q1.

Meta was set to lose a fifth of its market value on Thursday morning, amounting to roughly $200 billion. If the premarket losses hold, a decline of this size in Thursday’s session would mark the company’s worst one-day loss since its Wall Street debut in 2012, according to Reuters.

Meta reported a decline in daily active users from the previous quarter for the first time. The social media giant’s dismal forecast for Q1 was attributed to Apple’s privacy changes and increased competition. The company will miss out on $10 billion due to iOS’s privacy settings, CFO David Wehner said during Meta’s earnings call.

In 2020, when Meta jumped 33% over the course of the year, and even in 2021, when the social media giant’s stock delivered a 24% return, keeping pace with the tech-focused Nasdaq Composite, the worry of overexposure to mega-cap tech stocks was hushed.

However, the storyline has quickly changed, leaving investors underprepared and overexposed. The tech-dominated Nasdaq fell more than 8% in January, its worst monthly drop since the end of 2019.

Shares of Meta have been trending downward since its high in September 2021, and now a plunge following its lackluster outlook for Q1 emphasizes that the question needs reiterating: Are market-cap funds overweight in big tech?

In an equal-weight strategy, such as the Invesco S&P 500 Equal Weight ETF (RSP A-), Meta is weighted at just 0.20% — right on par with the rest of its holdings.

Market capitalization-weighted indexes can often result in just a few companies having an outsized influence on index performance. When looking at the S&P 500, investors have over 11 times the exposure to Meta in a market cap-weighted strategy than they would in an equal-weighted approach.

Investors are facing levels of concentration risk not seen in decades with the S&P 500’s top five holdings growing increasingly large at nearly 20%, overexposing investors to the declines in mega-cap tech stocks.

Opting for an equal-weight index, as opposed to a market cap-weighted approach, can provide diversification benefits and reduce concentration risk by weighting each constituent company equally, so that a small group of companies does not have an outsized impact on the index.