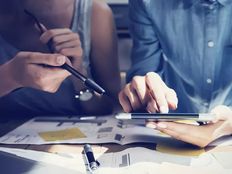 RCD Is a Way to Spread Consumer Discretionary Bets

The consumer discretionary sector and the related cap-weighted funds were long dominated by Amazon (NASDAQ:AMZN). That remains the case today, though the e-commerce giant is sharing the spotlight with Tesla (NASDAQ:TSLA).

“Since S&P performance is cap-weighted, Amazon and Tesla have the same impact on sector returns as ‘the other 57,’” says Scott Opsal of Leuthold Group. “Likewise, the sector’s financial metrics reflect the other worldly growth rates and valuations of A&T in proportion to the mature growth and restrained placed on the typical consumer discretionary company.”

Said another way, Amazon and Tesla make consumer discretionary feel like a growth sector when, in actuality, many of its other large-cap components are in fact value companies. That indicates that Amazon and Tesla are distorting the sector’s factor profile. Along those lines, about 30% of RCD’s 61 holdings are classified as value stocks while 21% are considered growth names.

Other data points, including sales growth, demonstrate the skew that the companies have on the cap-weighted consumer discretionary sector.

Leuthold’s Opsal points out that the combined revenue growth rate for Amazon and Tesla hasn’t fallen below 20% for the past 10 fiscal years, but sales growth for the other 57 members of the consumer discretionary sector often labored around 5% or less.

Improving growth rates across other consumer discretionary sub-groups add to the case for RCD. For example, Opsal sees the travel and leisure group as being on its way to regaining profitability following a slump caused by the coronavirus pandemic. He adds that the profit outlook for the automotive group is “robust.”

None of RCD’s holdings command a weight of more than 2%, indicating that the fund is in fact diverse and more levered to recoveries in groups such as automotive, homebuilders, and travel and leisure than its cap-weighted peers.

Opsal notes that homebuilders are “historically cheap” while noting that investors may need to be patient with travel and leisure names. He overtly recommends RCD over cap-weighed competitors, saying that the equal-weight Invesco ETF “subdues the impact” of Amazon and Tesla.