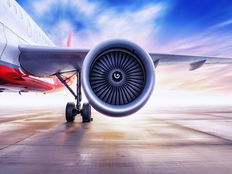 U.S. airline stocks took flight on Thursday on strong first quarter earnings reports and outlooks for the rest of the year.

American Airlines, the largest airline in the U.S., on Thursday said that last month was the first time since the beginning of the pandemic that its revenue surpassed 2019 levels, adding that it will return to profitability in the current quarter.

United Airlines said on Wednesday that it expects to be profitable this year, pointing to the return of business travel for the first time in over two years.

Airline stocks already rose earlier in the week on legislation; a Federal judge threw out the mask mandate that the Biden administration had issued for flights as part of its COVID-19 public health measures.

RGI is different from other ETFs tracking the same index because it employs a unique equal-weighted strategy, meaning that component companies receive approximately equal allocations, resulting in more balanced exposure than other alternatives.