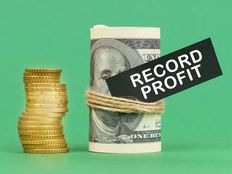 The energy companies’ profits surged in the latest quarter from the highest energy prices in over a decade and lucrative oil-refining margins, the Wall Street Journal reported. Combined with Shell PLC (SHEL), the three largest Western oil companies posted a record $46 billion in combined profit in the second quarter.

RYE is up nearly 3.2% in late morning trading and has increased 7.9% over five days. The fund is up 34.1% year to date. The fund offers a unique way to access the U.S. energy market, giving investors seeking to avoid cap-weighted products an alternative way to bet on oil stocks.

Exxon, weighted at 4.97% in RYE as of July 28, said Friday its second-quarter profit rose to $17.9 billion, a record high and nearly four times as much as the same period a year ago.

RYE is equal-weighted, meaning that exposure is spread evenly across portfolio components. This methodology may be particularly appealing in the top-heavy energy industry, where traditional cap-weighting can result in significant concentration issues, according to VettaFi.

RYE charges 40 basis points, and while this ETF may be more expensive than some competitors from a cost perspective, it offers an opportunity to achieve more balanced exposure to the energy sector that avoids the potential performance drags of cap-weighted ETFs.

Incepted in 2006, the fund has $473 million in assets under management.