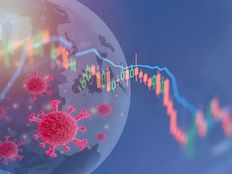 Today, March 11, marks the two-year anniversary of the declared state of emergency for the COVID-19 pandemic, a seismic event that has had global effects, impacting every aspect of peoples’ lives.

The last two years have been marred by significant turmoil. There have been over six million deaths due to COVID-19, according to Johns Hopkins University, widespread and long-lasting supply chain disruptions, pivotal elections leading to policy change, red-hot inflation nearly reaching double digits, and a war raging between Russia and Ukraine, causing human tragedy and global economic uncertainty.

These profound events have shaken up markets, leading to nauseating levels of turbulence and investor insecurity; however, looking at the last two years may be able to ease panic for longer-term investors.

Meanwhile, the two-year Treasury rate was at 1.31% on March 1, 2022, creeping up slowly alongside rising interest rates.

Some inflationary pressures have continued to worsen, with the CPI reaching a four-decade record of 7.9% in February year-over-year, which has not yet taken into account the surge in energy prices as well as other commodities due to the Russia-Ukraine crisis, spurring expectations of significant interest rate hikes.

However, contrary to popular belief, U.S. stocks generally did better during Fed tightening cycles than during Fed easing cycles, according to Talley Léger, senior investment strategist at Invesco

More downside and volatility is expected as Russia’s invasion of Ukraine came as an enormous surprise to markets, as reflected in the stock market sell-off as well as some of the speculative activity in commodity prices; however, analysts predict that markets will start to recover as the global economy adjusts expectations and digests such a dramatic departure from conventional expectations.

Thus, for investors with a longer-term time horizon, Kristina Hooper, chief global market strategist at Invesco, suggests that now is not a time to abandon stocks. Rather, Hooper believes that this is a time to be well-diversified across and within asset classes, including alternatives such as commodities.

Opting for an equal-weight index, as opposed to a market cap-weighted approach, can provide diversification benefits and reduce concentration risk by weighting each constituent company equally so that a small group of companies does not have an outsized impact on the index.