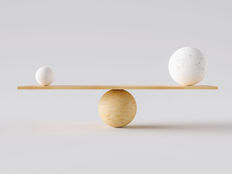 There Are Equal-Weight Boons With Small-Caps, Too

When investors think of equal-weight exchange traded funds, they typically think of large-cap strategies, including the Invesco S&P 500® Equal Weight ETF (RSP A-).

That makes sense not only because RSP is the largest equal-weight ETF, but also because concentration risk is becoming an issue with large-cap equal-weight funds as market values for the likes of Apple (AAPL), Microsoft (MSFT), and others expand at a seemingly unrelenting pace.

While EWSC flies under the radar, it turns 11 years old in December, so it’s got a fairly lengthy track record, and an impressive one at that.

Alright, to be fair, that article is dated to 2018. Past performance isn’t guaranteed to repeat. However, over the past three years, EWSC is beating the largest ETF tracking the cap-weighted S&P SmallCap 600 by 760 basis points. Year-to-date, the Invesco fund is topping its cap-weighted rival by 630 basis points.