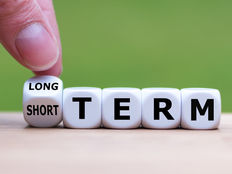 Try and Take the Long View of Equal-Weight ETFs

Investors often hear about the efficacy of taking long-term approaches. However, there are also plenty of examples where investors are compelled to take short-term views.

That’s increasingly prominent today when fear of missing out (FOMO) is pervasive, but investors should be mindful of what assets they apply short-term thinking to. While equal-weight exchange traded funds, such as the Invesco S&P 500® Equal Weight ETF (RSP A-), have periods of both out-performing and lagging the cap-weighted S&P 500, the long-term track of equal weight is compelling, indicating that patience is a virtue with this strategy.

Still, it’s easy to see why some investors view equal weight as a short-term proposition. Perhaps it’s because of the belief that the size and value factors drive equal-weight out-performance, or so the saying goes.

“Further related to this, an equal-weighted ETF would position you nicely for an expected rebound in economic activity as the pandemic comes to an end – the so-called reflation trade. An equal-weighted ETF would increase your exposure to less loved parts of the market, mainly cyclical and value stocks, which should benefit from this expected economic boom,” reports Tom Bailey for Interactive Investor.

However, value isn’t the sole determinant of RSP’s fortunes. The largest equal-weight ETF is up almost 24% year-to-date, an advantage of about 500 basis points over the S&P 500 Value Index. Likewise, RSP is beating both major small-cap benchmarks this year, confirming that patience, not active trading, is being rewarded with the equal-weight ETF.

All right, so RSP debuted in April 2003, meaning that it wasn’t around in 1999, and it also wasn’t around for the bursting of the tech bubble the following year. While starting from RSP’s inception lowers its advantage over the cap-weighted S&P 500, the equal-weight ETF’s advantage is still substantial and acts as a strong indicator of RSP’s validity as a buy-and-hold strategy.

Since 2003, “the performance of the market cap weighted S&P 500 definitely starts to look better, with a return of around 540%. However, the equal-weighted index still wins hands down, with returns of just under 710%,” notes Interactive Investor.

Bottom line: No investment is perfect over long-time horizons, but RSP does have a penchant for rewarding investors who have a little bit of patience.