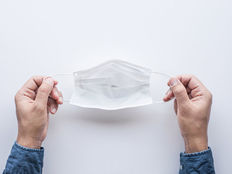 The rise of Omicron infections around the globe has contributed to concerns over prolonged global supply chain disruptions that could further fuel upward inflationary pressures. However, there are initial signs that the vaccine booster shots offer some protection to ward off Omicron.

“With the equity markets, it’s kind of like a biathlon,” Larry Adam, chief investment officer at Raymond James, told the Wall Street Journal. “We’ve been skiing very rapidly and then in the second part of the biathlon, you have target practice, where you have to be much more precise and focused with sector, individual stock and industry calls.”

Additionally, investors are hoping that the Democrats can revive the $2 trillion spending package. Senate Majority Leader Chuck Schumer stated that Democrats would take up the legislation early next year, despite opposition from Senator Joe Manchin.

“The market is just rebounding after profit-taking in these last number of days because it’s been such a strong year,” Linda Duessel, senior equity strategist at Federated Hermes, told the WSJ. “We’re running out of time here but there is still a chance for that Santa Claus rally, which we’ve been cheering for.”

While the economy continues to grow, Omicron has thrown a wrench into many investors’ outlooks, and the markets expect the uncertainty to linger.