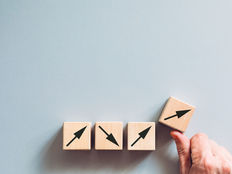 On Monday, U.S. markets and stock exchange traded funds were mixed as traders refocused on yields and inflation.

The Nasdaq dipped the most among its peers after technology stocks retreated in light of rising Treasury yields, which typically weighs on the sector since they discount future earnings, Reuters reports. On the other hand, the financial sector benefited from the rising rates.

“Watch for interest rates to apply some pressure to the tech stocks. So if we do get higher rates – tech will slow down a little bit and a rotation to financials makes sense in that scenario. Higher rates, banks make more money,” Jay Pestrichelli, chief executive of investment firm ZEGA Financial, told Reuters.

Companies that have reported third quarter earnings so far have broadly beaten expectations, supporting the ongoing rally in stocks. However, the elevated inflation levels have also weighed on government debt, a main alternative to stocks.

“It seems as if the equity markets are kind of a bit detached from other markets,” Jim Besaw, chief investment officer of GenTrust, told the WSJ.

Investors will also be watching out for earnings reports from several major retailers, including Walmart Inc., Target Corp, Home Depot Inc., and Macy’s Inc. Observers will be looking for how retailers are responding to rising prices and ongoing supply chain hurdles.

“Inflation is probably going to end up helping (retailers) somewhat because some of these big-box companies are able to … raise prices and maintain pretty close to their margin levels,” Robert Pavlik, senior portfolio manager at Dakota Wealth, told Reuters.