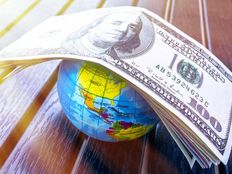 After Drubbings, Emerging Markets Bonds Worth a Look

Historically, one of the bond segments that fixed income investors look to avoid when the Federal Reserve raises interest rates is emerging markets debt.

That advice is proving accurate this year, and it’s doubly true for bonds denominated in local currencies, owing to the fact that the dollar is currently one of the world’s best-performing currencies. A strong dollar is often a drag on emerging markets bonds.

Still, some experts believe that there’s opportunity to be had in this asset class. If that’s the case, patient, income-hungry investors may find value in exchange traded funds such as the VanEck J.P. Morgan EM Local Currency Bond ETF  EMLC.

EMLC, which follows the J.P. Morgan GBI-EM Global Core Index, is being crimped by Fed tightening this year. However, the VanEck ETF offers investors an interesting surprise. Despite the surging dollar, EMLC is the largest emerging markets bond ETF which holds dollar-denominated bonds by more than 500 basis points year-to-date.

As has been widely noted over the past several months, a point in favor of emerging markets bonds is that many central banks in developing economies already unleashed higher interest rates in efforts to ward off inflation.

“Driving an inflection point is the diverging monetary policy around the world. Many emerging market central bankers those in Brazil and Mexico—have been ahead of the Federal Reserve and have already been raising rates to tackle inflation,” according to Barron’s.

EMLC, which holds 364 bonds, allocates about 17% of its weight to Brazil and Mexico — Latin America’s two largest economies.

Adding to the case for EMLC is a simple point: Times change. Today, many income investors may be skittish about considering emerging markets debt because they remember that the asset class was punished during the taper tantrum of 2013. Back then, however, developing economies were saddled with weak fiscal positions and high current account deficits. Broadly speaking, that’s not the case today, which suggests that some of the countries represented in EMLC can weather Fed tightening with more aplomb than they’re currently being given credit for.

“Not only have they become more proactive, but many of the countries are in much better fiscal health than in 2016. They are less reliant on foreign-denominated debt, which should make them more resilient to the Fed’s tightening cycle than during the so-called taper tantrum that year, when investors fled the asset class,” notes Barron’s. “For those not yet invested in emerging markets, it’s a good time to step in.”