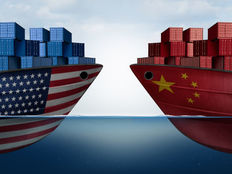 China country-specific ETFs were leading the charge Monday after President Donald Trump and Chinese President Xi Jinping agreed on a stay in the prolonged trade war and renewed trade talks.

The rally on Monday came after Trump and Xi met at the Group of 20 summit in Japan where both sides agreed to hold off on further tariffs, CNBC reports.

Nevertheless, market observers cautioned that this does not mean a signed deal will be in place any time soon.

“Although a worst case outcome has been averted, the threat of tariffs remains and it is unlikely the truce gives much confidence to firms’ investment and hiring decisions,” Tapas Strickland, an economist at National Australia Bank, said in a note. “It is likely that soft manufacturing conditions will persist until if and when a fuller agreement is fleshed out.”

Citi analysts also said that “we expect the current truce to last through the end of the year, with 2020 potentially being a ‘Deal-maker’ year.”

The two sides also agreed to make concessions to reflect their intent to move forward with trade talks. For example, Trump suggested he could reverse his decision to ban American companies from selling products to telecom giant Huawei.

Beyond the short-term trade volatility, investors have been closely eyeing Chinese shares, notably China A-Shares, ahead of major index changes from MSCI. Eugene Qian, president of UBS Securities, pointed out that foreign investors have for the last 12 to 18 months been looking to buy into China A-Shares and estimated $70 billion “should come into A shares by the end of the year,” according to a separate CNBC report.