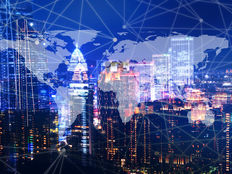 EM Rate Hikes Could Be Good for This Bond ETF

Emerging markets central banks are beating their developed market counterparts to hiking interest rates, and while that might be a turn-off for investors considering developing markets debt, it doesn’t need to be.

In fact, hawkish emerging markets central banks could be catalysts for exchange traded funds, including the VanEck J.P. Morgan EM Local Currency Bond ETF  EMLC. While rate hikes, regardless of jurisdiction, are usually seen as a drag on bonds, particularly longer-dated fare, the recent round of tightening could be supportive for EMLC.

The VanEck ETF seeks to track the J.P. Morgan GBI-EM Global Core Index, which features bonds denominated in local currencies. With the dollar strong this year, many emerging markets currencies are taking beatings, but rate hikes could prop up those currencies.

However, there are other benefits to emerging markets rate increases, and those perks could accrue to EMLC investors over time.

“The rate increases have accelerated as inflation has picked up and the U.S. dollar strengthened. A wide variety of countries is now tightening policy, ranging from Brazil to Russia and South Korea,” according to BlackRock research. “The result? The emerging world has a head start in normalizing policy. A weighted average of EM policy rates now stands at 3.2%, versus near zero or negative rates in the U.S. and euro area.”

Brazil and Russia combine for over 13% of EMLC’s geographic exposure, according to VanEck data. Beyond that, there are benefits to emerging markets central banks beating developed markets peers to the rate-tightening punch.

“The hiking cycle has started well ahead of the Fed’s tightening – which has often spelled trouble for EMs as investors start to demand more compensation for holding riskier assets,” adds BlackRock. “The Fed has just started to taper asset purchases, and we don’t see it raising rates until the middle of 2022. The EM approach has created a large interest rate buffer versus DM, lowered valuations and raised coupon income.”

In this climate, income is vital, and EMLC delivers that as highlighted by a 30-day SEC yield of 5.38%. Obviously, there will always be more risk with emerging markets bonds than with U.S. Treasuries, but just over 21% of EMLC’s holdings carry non-investment grade ratings. Add to that, the outlook for EM debt heading into 2022 is attractive.

“Improved valuations and coupon income should help cushion any yield rises and prevent disorderly moves in EM bonds when the Fed lifts off, we believe. Indeed, we don’t see a repeat of 2013’s taper tantrum when the Fed’s decision to cut back asset purchases caused havoc for EM assets,” concludes BlackRock.