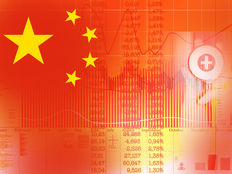 ETF of the Week: The VanEck ChiNext ETF (CNXT)

China is rebounding after its most recent round of COVID-19 lockdowns come to an end and Chinese A-shares, or companies that are listed in Mainland China, are benefitting from both the recovery and the fiscal stimulus that the government is providing.

It’s a fiscal policy that is running counter to almost every other emerging market and developed country’s economy and stands in stark contrast to the aggressive tightening happening with the U.S.

“In China, they’re continuing to provide stimulus and lowering interest rates which has actually been great and encouraging for their economy as well,” Lydon said.

“The declines that we’ve seen in China and other emerging markets have been huge which means that when they bounce back, there’s an opportunity for even greater moves on the upside,” Lydon explained. “If you are looking for opportunities to the upside and you want to follow a technical trend-following strategy, there may be a good sign to diversify overseas and look at China.”

CNXT is a play not just on the technology sector within China but also on industrials, financials, materials, and healthcare as well via A-shares. Jaffe explained that when the Chinese economy is doing well, this ETF outperforms but to have caution on the downside as performance can fall off sharply during a downturn.

“The basis of this ETF is the ChiNext Index which follows the performance of the 100 largest, most liquid stocks that are listed and traded on the Chinese markets, on the Shenzhen Stock Exchange,” Lydon said, and that it follows the performance of the Chinese economy. “If you feel that China, in general, is going to rebound, here’s a way to participate.”

Investing in emerging markets currently offers some of the best valuation potentials in 20 years, Lydon explained, including CNXT.

“If you look at what you’re buying, for the price that you’re paying, it’s great. However, it’s really important if you’re going to get in at this point to follow a trend,” cautioned Lydon.