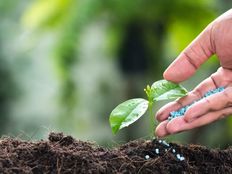 Fertilizer stocks may not be the first asset class that investors think of when they consider safe havens, but there’s no denying the group is working well against the backdrop of Russia’s invasion of Ukraine.

The VanEck Vectors Agribusiness ETF (MOO B), one of the exchange traded funds with the most exposure to fertilizer stocks, jumped 1.77% on above-average volume on Thursday, hitting a new 52-week high while extending its year-to-date gain to almost 4%. That’s all while the S&P 500 is lower by 10.42%.

The reason for MOO’s utility as Russia escalates war with Ukraine is simple. Russia, likely as a way of firing back at the West for harsh economic sanctions, is halting fertilizer exports. President Vladimir Putin said, “we don’t want to have such price rises on the Russian food market.”

MOO features exposure to 22 countries, and Russian stocks represent an inconsequential 0.15% of the fund’s roster. However, the ETF’s fertilizer components are proving responsive to that country weaponizing fertilizer exports.

All this to say, Russia is highly relevant in the fertilizer export conversation.

“In early February, Russia banned ammonium nitrate exports; however, Russia also accounts for 14% of the global urea market and 21% of the Potash market,” according to Seeking Alpha.

Another avenue through which Russia could throw a wrench at fertilizer prices is by reducing natural gas exports to Europe. That commodity is a major component in the production of some fertilizer varieties.

As a result of Russia’s temporary halt on fertilizer sales to other countries, North America-based producers, such as CF Industries (NYSE:CF), Mosaic (NYSE:MOS), and Nutrien (NYSE:NTR), all of which are MOO member firms, are thriving.