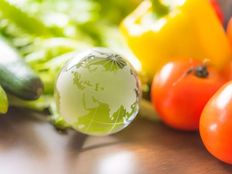 Some investors may not be thinking of the role food that can play in combatting climate change, but this is a credible and investable concept.

Exchange traded funds, including the VanEck Future of Food ETF (YUMY ), make it easy for investors to tap into the food/climate awareness theme. The actively managed ETF debuted last December and focuses on “companies that are leading, enabling, supplying, disrupting, or benefiting from new environmentally sustainable agriculture and food products and services,” according to VanEck.

YUMY could prove to be a well-timed arrival on the ETF scene because more experts and investors are awakening to the fact that if the agriculture industry isn’t an active participant in fighting climate change, meeting various climate and decarabonization goals will be hard, if not impossible.

“Today, agriculture accounts for a fourth of greenhouse gas emissions, 80% of deforestation, 70% of water use, and 78% of ocean and freshwater pollution, according to Sustainalytics writes Morningstar analyst Leslie Norton. “A warming globe also produces more erratic weather and hurts biodiversity, leading to the emergence of disease, which in turn produces lower crop yields.”

As noted above, YUMY is actively managed, which is a relevant trait because the agricultural and food sectors aren’t typically viewed as growth destinations. However, those groups are in the early innings of what’s expected to be a long-term makeover aimed at enhancing climate credentials. Speaking of growth opportunities, more venture capitalists are eyeing the food industry through a climate lens.

“In 2021, venture capitalists funded 1,358 food tech deals worth $39.3 billion, double the previous year, according to PitchBook, a Morningstar company. Much of it went to online grocers, whose popularity skyrocketed during the pandemic. But there were also alternative-protein investments, including $500 million in Impossible Foods, which is expected to go public this year,” adds Norton.

YUMY allocates over 43% of its weight to the consumer staples sector, and some of its holdings from that group, including Tyson Foods (NYSE:TSN), are investing in alternative proteins.

To that end, YUMY’s 36% weight to the materials sector is relevant because that sector has inroads to sustainable packaging as well as environmentally friendly food production products.