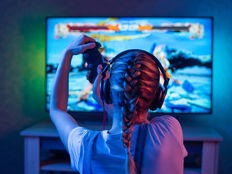 The VanEck Vectors Video Gaming and eSports ETF (ESPO) is higher by just 3.30% year-to-date, but investors should examine the video game exchange traded fund’s potential on a deeper level.

That evaluation may reveal that ESPO’s 11.34% decline from its 52-week peak is an opportunity to buy on the dip. Some of the fund’s 2021 lethargy is attributable to growth stocks being out of favor relative to value. Nearly all of the 25 holdings in the $819.4 million ESPO are classified as growth names.

Then there’s the much discussed global semiconductor shortage, which is relevant to ESPO investors because chips are vital to the production of video game consoles. ESPO allocates almost 17% of its weight to NVIDIA (NASDAQ: NVDA) and Advanced Micro Devices (NASDAQ: AMD), the dominant makers of graphic processing units (GPU) for consoles.

Fortunately, it appears as though the darkest days of the chip supply chain woes are here now, meaning the situation could ease in the back half of 2021.

“Our analysts believe we’re probably in the worst period of that right now,” said chief Asia economist Andrew Tilton in a recent CNBC interview. “That will gradually ease over the back half of the year.”

Another reason ESPO and rival funds are trailing the broader market this year is the concern that as the world shakes off the effects of the coronavirus pandemic, gamers will be inclined to put down their controllers and embrace other forms of entertainment.

After all, it was shelter-in-place directives and the increased move toward in-home entertainment that propelled ESPO to a nearly 84% gain last year. Take-Two Interactive (TTWO) Chief Executive Officer Strauss Zelnick recently made comments indicating there will be some moderation in gamer habits in a post-pandemic world, but that the runway for gaming software growth is now ahead of where it was before the pandemic. Take-Two is ESPO’s ninth-largest component.

In addition to Take-Two, ESPO is home to some of the other big-name video game publishers, including Activision Blizzard (ATVI), Electronic Arts (EA), and Konami. For investors considering ESPO, the fund’s software exposure is relevant because this year will bring new releases of popular franchises and new games.

“This year will also feature some major releases of high-profile games for the newest Xbox and PlayStation consoles, including the first Battlefield sequel from EA in three years,” reports Dan Gallagher for the Wall Street Journal.