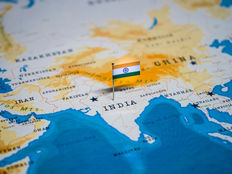 Indian equities are among the best emerging markets performers this year. While the MSCI India Index is up an impressive 25%, some exchange traded funds are doing even better.

For example, the VanEck Vectors India Growth Leaders ETF (GLIN C) is higher by 35% — a strong indication that tilting toward Indian growth stocks is a winning strategy. Investors who think that they’ve missed out on the run in GLIN might not have to fret because the near- and long-term outlooks for equities in Asia’s third-largest economy are compelling.

“There are two reasons that more gains could be in the pipeline: the present and the future. The present is gelling as few would have imagined last spring, when India’s ghastly Delta wave gripped global attention. Recorded Covid-19 deaths have plunged 95% from a peak in May. Three-quarters of the adult population has received at least one vaccine injection,” reports Craig Mellow for Barron’s.

GLIN allocates 21.6% of its weight to the healthcare sector, providing some leverage to rising vaccination and increasing preventative measures among Indian citizens. Likewise, the fund has a 9.4% weight to consumer cyclical stocks, giving it some exposure to a reopening trade. GLIN’s exposure to cyclical sectors, which extends well beyond the consumer discretionary weight, is relevant because the Indian economy is roaring back to life.

“The economy is roaring back as a result, on track to grow 9.5% this year and 8.5% in 2022, according to the International Monetary Fund. Interest rates are at a record-low 4%. A $630 billion stash of currency reserves and current account surplus should allow the central bank to tighten gradually without tanking the rupee,” according to Barron’s.

Adding to the long-term allure of GLIN is the fact that India is now home to a vibrant initial public offerings (IPOs) market, meaning that the number of stocks traded there is growing. That could lead to a larger GLIN roster in the future. Moreover, the new crop of Indian IPOs hails from the technology and consumer internet sectors, among others, underscoring India’s credibility as a growth destination.

“Then there’s the future. India’s digital economy is roughly where China’s was in 2014, when Alibaba Group Holding went public," says Rishi Kapoor, co-CEO of private equity firm Investcorp. "The digital economy accounts for about 10% of India’s gross domestic product, compared with 40% in today’s China. One in 10 Indians shopped online prepandemic; nearly half of all Chinese do,” reports Barron’s.

GLIN allocates 26.7% of its weight to tech stocks and over 12% to consumer discretionary and communication services combined.