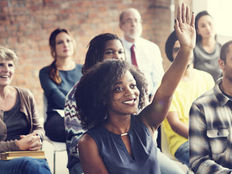 By Joseph M. Foster, VanEck Portfolio Manager and Strategist for the Gold and Precious Metals Strategy,

During May opposing market forces caused the gold price to continue a three-month consolidation. Stock market weakness due to a breakdown in tariff negotiations between China and the Trump administration was supportive. Gold also gained from falling real rates as five-year U.S. treasury yields dropped below 2%. Opposing these positive catalysts were the U.S. dollar and commodities.

The U.S. dollar index (DXY)1 stood firm near the top of its recent trading range. Meanwhile, commodities declined substantially on tariff and broader economic concerns. WTI crude oil fell 15.9% in May while copper declined 9.5%. Gold stood up to the steep fall in commodities, gaining $21.90 (1.7%) for the month to $1,305.45 per ounce. Gold stocks also gained with the NYSE Arca Gold Miners Index (GDMNTR)2 up 3.0% and the MVIS Global Junior Gold Miners Index (MVGDXJTR)3 advancing 0.2%.

Central bank demand stayed strong in the first quarter, as the World Gold Council reported a 145.5 tonne increase. This was the highest in six years and a 68% increase from a year earlier. Serbia became the latest country to announce its intentions to increase its official gold reserves.

Complacency Amid Diverging Manufacturing and Sentiment

May saw a relentless release of poor manufacturing results. The ISM Index, industrial production, Markit Flash Purchasing Managers’ Index, and durable goods all trended lower. Shipping and freight demand was down, and poor auto purchases caused retail sales to fall. The latest Duke University/CFO Global Business Outlook survey found nearly half of U.S. CFOs expect a recession by the end of the year and two-thirds see a recession in the next 18 months. All of this stands in sharp contrast to consumer sentiment, where the Conference Board Index saw a sharp increase and the preliminary University of Michigan index vaulted to 15-year highs.

The S&P 500 Index (SPX)4 hit a new all-time high on May 1. The Wall Street Journal reports that high yield municipal bond funds ("junk” munis) are seeing their highest inflows in decades. The High Tech Strategist reports the PHLX Semiconductor Sector Index (SOX)5 is up a whopping 35% in the first four months of the year during one of the sharpest industry downturns in decades. Complacency is rampant in today’s market, thanks to expectations for more economic stimulus from the U.S. Federal Reserve (Fed)—the “Powell put”—if the stock market runs into trouble.

However, we believe Fed policies will lose their efficacy if manufacturing is trending towards a new recession. Gold may continue to have mediocre returns until the market sees the Fed losing control of a weakening economy.

As the 2019 proxy season comes to a close, we have shareholder engagement on our minds. One of the positive crisis-era financial regulations coming from the 2010 Dodd-Frank Act is the proxy vote on executive compensation, or “say on pay”. This provision effectively enables shareholders to decide whether CEOs are overpaid. While the vote is non-binding, companies take it very seriously, and we’ve seen gold companies make changes to their compensation policies if say-on-pay approval falls below 80%. The emergence of ESG (environmental, social and governance) investing has further focused investors on corporate governance.

Shareholder engagement is on the rise with the objective of aligning company incentives and goals with those of their shareholders. According to Activist Insight, as reported in the Wall Street Journal,6 in 2018 a record 284 companies globally were publicly subjected to demands from activist investors, with 194 board seats changing hands—also a record. Meanwhile, mutual fund investor Neuberger Berman stated their opposing views publicly 60 times in 2018, up from 40 in 2014.7

When it comes to shareholder engagement, funds fall into one of three categories:

VanEck is in a somewhat unique position, managing both active and passive gold funds. We have seen shareholder returns suffer earlier in this decade due to misguided acquisitions, indebtedness and poor operating performance. While low gold prices have enforced financial and operating discipline on the gold industry, we never want to see a return to the poor business practices that characterized the boom years. We have become more engaged with boards and managements with the goal of maintaining discipline throughout the gold cycle. We have seen similar increases in engagement from other gold investors.

Here are a few examples:

• Last June, hedge fund manager Paulson & Co. launched a successful six-month proxy battle to oust the CEO and replace the board of Canadian mid-tier producer Detour Gold. Detour operates the world-class Detour mine in Canada, which continued to struggle after five years of production plagued with operating mishaps, social issues and escalating capital costs. Paulson is a long-term Detour shareholder who turned activist when it became fed up with management. The proxy fight provided the spark for non-activist investors to join a movement to express their frustrations with Detour by voting down management.

• Unlike passive funds, active fund managers can vote with their feet by selling or avoiding companies with poor managements. However, there are times when companies who perform poorly put forth credible plans to right the ship. This may encourage investors to give management a second or third chance. This was the case with Goldcorp when new management was brought in to turn the company around in early 2015. However, after three years of operating problems and missed expectations, it became clear to us that this management also had to go. As such, we welcomed Newmont’s proposal to buy Goldcorp in January, as we believe Newmont has the skills to manage Goldcorp’s assets. Unfortunately, Goldcorp management wasn’t done mistreating its shareholders. Goldcorp’s CEO received $11 million under a change of control provision and its Chairman’s retirement allowance was increased from $4.5 million to $12 million. One of Canada’s largest institutional investors, British Columbia Investment Management Corp. (BCI) voted against the Newmont/Goldcorp merger, saying: “BCI finds this [Chairman’s compensation] provision to be fundamentally misaligned with the interests of shareholders” and is “inconsistent with the governance principle of pay-for-performance.”8 We also publicly expressed our disappointment with the egregious payouts. While Goldcorp’s board failed to reduce its executive’s compensation, management has endured a public humiliation that will encourage other companies to act responsibly.

• In February, Barrick launched a hostile bid for Newmont to combine the world’s two largest gold producers. VanEck, German asset manager Flossbach von Storch, and others weighed in publicly on the deal in an effort to achieve the best outcome for shareholders (see Wall Street Journal’s article “Investor VanEck Urges Newmont to Renegotiate Merger Deal” for more details on our comments, specifically). Then in March, Barrick dropped its hostile offer, the companies formed a joint venture (JV) to combine their Nevada operations, and Newmont paid a special dividend to shareholders as an upfront payment for synergies it expects to achieve with the Nevada JV. We believe that without both public and private input from shareholders, this could have turned into a nasty takeover battle that ended up destroying value. Instead, the situation produced a significant win for Newmont, Barrick and their shareholders.

Through proxy season we believe our engagement and votes help companies keep the interest of shareholders front and center. We sometimes find it necessary to vote against management. As specialists who know the gold industry well, we also sometimes disagree with the recommendations of proxy advisors. The combined efforts of shareholders seeking to maximize returns using proxy votes, private discussions and public opinions helps the gold industry to act responsibly.

All company, sector, and sub-industry weightings as of May 31, 2019 unless otherwise noted.

3. MVIS Global Junior Gold Miners Index (MVGDXJTR) is a rules-based, modified market capitalization-weighted, float-adjusted index comprised of a global universe of publicly traded small- and medium-capitalization companies that generate at least 50% of their revenues from gold and/or silver mining, hold real property that has the potential to produce at least 50% of the company’s revenue from gold or silver mining when developed, or primarily invest in gold or silver

4. S&P 500®Index (SPX) is an American stock market index based on the market capitalizations of 500 large companies having common stock listed on the NYSE or NASDAQ.

Nothing in this content should be considered a solicitation to buy or an offer to sell shares of any investment in any jurisdiction where the offer or solicitation would be unlawful under the securities laws of such jurisdiction, nor is it intended as investment, tax, financial, or legal advice. Investors should seek such professional advice for their particular situation and jurisdiction.

Any indices listed are unmanaged indices and include the reinvestment of all dividends, but do not reflect the payment of transaction costs, advisory fees or expenses that are associated with an investment in a Fund. Certain indices may take into account withholding taxes. An index’s performance is not illustrative of a Fund’s performance. Indices are not securities in which investments can be made.

Please note that the information herein represents the opinion of the author, but not necessarily those of VanEck, and this opinion may change at any time and from time to time. Non-VanEck proprietary information contained herein has been obtained from sources believed to be reliable, but not guaranteed. Not intended to be a forecast of future events, a guarantee of future results or investment advice. Historical performance is not indicative of future results. Current data may differ from data quoted. Any graphs shown herein are for illustrative purposes only. No part of this material may be reproduced in any form, or referred to in any other publication, without express written permission of VanEck.

About VanEck International Investors Gold Fund (INIVX): You can lose money by investing in the Fund. Any investment in the Fund should be part of an overall investment program, not a complete program. The Fund is subject to the risks associated with concentrating its assets in the gold industry, which can be significantly affected by international economic, monetary and political developments. The Fund’s overall portfolio may decline in value due to developments specific to the gold industry. The Fund’s investments in foreign securities involve risks related to adverse political and economic developments unique to a country or a region, currency fluctuations or controls, and the possibility of arbitrary action by foreign governments, or political, economic or social instability. The Fund is subject to risks associated with investments in Canadian issuers, commodities and commodity-linked derivatives, commodities and commodity-linked derivatives tax, gold-mining industry, derivatives, emerging market securities, foreign currency transactions, foreign securities, other investment companies, management, market, non-diversification, operational, regulatory, small- and medium-capitalization companies and subsidiary risks.

Diversification does not assure a profit or protect against loss.