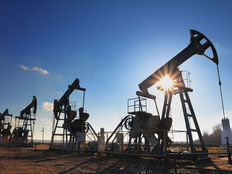 Oil prices have been turbulent of late, but that’s not altering the fact that the energy sector has been the best-performing group in the S&P 500.

Up nearly 66% year-to-date, the VanEck Vectors Unconventional Oil & Gas ETF (FRAK B-) is one of the leaders of the energy exchange traded funds pack. Fortunately, while the sector is on a torrid pace, it’s not excessively valued. In fact, some analysts believe there are good deals to be had in the energy patch.

“Even with the rally year to date, we have energy as fairly valued, with the median stock trading at a price/fair value ratio of 1. Opportunities exist across all segments, particularly services and integrated, which trade at a 29% and 10% discount to intrinsic value, respectively,” writes Morningstar analyst Dave Meats.

FRAK follows the MVIS Global Unconventional Oil & Gas Index, meaning some of its 29 components are classified as exploration and production equities. Meats points out that, broadly speaking, the E&P industry is slightly overvalued today, though not drastically so. That could be a symptom of the group’s historical sensitivity to oil prices.

Opportunities in the Energy Sector

While FRAK’s almost 66% gain this year is hard to ignore, investors shouldn’t fret over the notion that catalysts from here on are capped. Actually, the opposite could prove to be true.

For starters, cash flow generation by FRAK components is accelerating, providing a solid fundamental reason to consider the fund. With that elevated cash flow comes the possibility of more shareholder rewards. ConocoPhillips (NYSE: COP), FRAK’s largest holding, is proving as much.

Second, although the Organization of Petroleum Exporting Countries (OPEC) recently agreed to a modest output hike, the cartel couldn’t reach an agreement for more substantial increases. As such, some market observers are forecasting crude supplies will remain tight through end of this year, which could support prices.

“The firm’s competitive edge is strengthened by its scale and technical prowess, and we’re confident the firm can stay near the front of the pack on profitability, given its deep inventory of premium drilling opportunities,” said the analyst. “That sets the firm up well for sustainable free cash generation under a wide range of commodity scenarios, supporting further dividend hikes.”