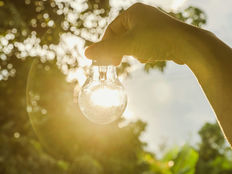 The U.S. is one of the leaders in the fight against climate change and the effort to reduce carbon emissions, and federal and state governments are willing to commit capital to that effect.

Some of that spending is occurring today due to needed immediacy in the climate battle, but plenty of spending is forecast for the years ahead. That could be a boon for exchange traded funds such as the VanEck Vectors Low Carbon Energy ETF (SMOG B-). SMOG follows the MVIS Global Low Carbon Energy Index.

Given the size and scope of expected climate investments by governments and companies for years to come, SMOG has credibility as a viable long-term climate-aware idea for investors.

“The United States’ stance in addressing the climate crisis shifted dramatically in 2021 as the incoming  President Joe Biden immediately rejoined the Paris Accord, issued an Executive Order on Climate-Related Financial Risk, and secured a bi-partisan Infrastructure Plan with a focus on low-carbon infrastructure and transportation,” according to FTSE Russell research. “But the direction of travel of the US has been green for longer than casual observers might think. The US remains the second largest emitter of greenhouse gases but we calculate that it is also the largest market in the global green economy with over $3 Trillion of revenues generated from green products and services.”

Home to 71 stocks, SMOG has the depth investors are looking for when it comes to green economy funds. The ETF features exposure to wind, solar, hydro, and hydrogen companies as well as lithium-ion batteries, electric vehicle makers, and purveyors of smart grid technologies, among other renewable energy concepts.

SMOG’s sector-level depth is impressive and relevant because it reveals considerable leverage to the U.S. green economy, with consumer discretionary, industrial, and technology stocks combining for 62% of the ETF’s roster, according to VanEck data.

As FTSE notes, there are “10 green sectors, 64 subsectors, and 133 micro sectors focusing on the whole value chain of the green economy. Transport Equipment, has grown significantly in recent years driven by the expanding global market for hydrogen-powered, electric and hybrid road vehicles.”

While past performance isn’t a guarantee of future returns, there’s no denying that green economy and renewable energy stocks have been stellar performers in recent years. For its part, SMOG returned 159.2% for the three years ending Sept. 24 while the S&P 500 was higher by 60.9% over that period.