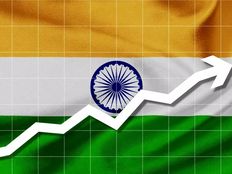 Emerging markets are out of favor in 2022, but for patient investors with extended time frames, the asset class could potentially reward.

Count Indian equities among the reasons why. Investors can embrace Indian stocks with a number of exchange traded funds, but for those looking to tap into true growth avenues in this burgeoning economy, the VanEck Digital India ETF (DGIN) is an idea that makes sense.

DGIN, which debuted in February, follows the MVIS Digital India Index. That benchmark is a relevant spin on Indian stocks because it’s dedicated to companies focusing on the digitization of the Indian economy. Conversely, some old guard India ETFs and indexes are littered with slower-growing companies, and in some cases, state-owned enterprises (SOEs).

For its part, DGIN devotes nearly 80% of its weight to the technology and communication services, potentially offering investors more growth avenues than are found with traditional India ETFs.

“China and India are expected to become the world’s largest and third largest economies respectively in the next decade while their consumers will increasingly dictate global tastes and trends. Capitalization of their equity markets could also increase by a factor of four or more by 2050,” said abrdn CEO Stephen Bird in an interview with CNBC.

Bird is bullish on Asia, calling the 21st century the century of Asia. Obviously, India looms large in such a scenario. The country is already the continent’s third-largest economy and the world’s largest democracy.

“This century is Asia’s century. It must also be the century in which economic objectives are reconciled with sustainability goals,” Bird concluded. “The financial industry can and must play a pivotal role in converging these two priorities, guiding investment to support both outcomes.”

Home to 1.38 billion people, India is also a coveted investment destination based on that massive population, and that jibes with DGIN’s objective of being an investable avenue to increased digitization in the country. Currently, internet and mobile phone penetration is light in India relative to developed economies, but folks there who have access to the internet and mobile phones are broadly tech-savvy and are embracing concepts such as online retail in significant fashion.

With more digital and online-related Indian companies mulling initial public offerings (IPOs), DGIN could be at the right place at the right time for a new wave of long-term economic growth in the country.