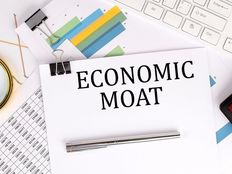 Stocks with the wide moat designation often come with an array of benefits, including quality attributes and enviable competitive positioning. As such, it’s reasonable that many investors think that they will pay up for the privilege of embracing wide moat names.

The VanEck Vectors Morningstar Wide Moat ETF (MOAT A-) proves that not all wide moat stocks are pricey. In fact, though it’s not a value exchange traded fund in the typical sense, MOAT is home to some stocks that are attractively valued.

The $6.7 billion MOAT follows the Morningstar Wide Moat Focus Index, which is a basket of companies that, according to Morningstar’s research team, have compelling valuations and sturdy competitive positioning. The index is refreshed regularly to keep valuations from getting too rich, and that’s an important element in the MOAT methodology.

“In an effort to keep the index focused on the least-expensive high-quality stocks, Morningstar reconstitutes it regularly. The index consists of two subportfolios containing 40 stocks each, many of which are overlapping positions,” says Morningstar Susan Dziubinski.

Some of the newest additions to MOAT — the fund’s roster size stands at 50 as of Oct. 1 — fit the bill as attractively valued. Powersports equipment maker Polaris (PII) is an example.

“We think the company will benefit this year as it continues to backfill dealer inventory, though supply chain constraints could lead to some volatility in market share gains,” says Dziubinski.

A provider of money transfer services, Western Union (WU), isn’t the sexiest name in the financial services sector, but it also makes the cut for MOAT admittance.

“We assign Western Union (WU) a wide moat based on its scale advantage in the money transfer market, and we expect solid growth in the near term as the industry bounces back from pandemic-driven declines, notes senior analyst Brett Horn,” adds Dziubinski.

Polaris and Western Union combine for nearly 5% of MOAT’s weight. None of the fund’s holdings exceed allocations of 2.86%. Truck brokerage firm CH Robinson Worldwide (CHRW) and credit reporting bureau Equifax (EFX) are other examples of MOAT holdings that look attractive on valuation. Those two names combine for about 2.4% of MOAT’s roster.

“One of the big three credit bureaus, Equifax (EFX) enjoys strong operating leverage from incremental revenue, thanks to the fixed costs inherent in its business, says analyst Rajiv Bhatia. Its workforce solutions segment has been a standout in recent years, he adds,” according to Morningstar.