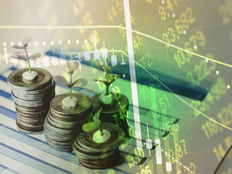 The green bond market is booming — issuance this year will be more than triple what was seen in 2017 — and that’s putting a spotlight on exchange traded funds, namely the VanEck Vectors Green Bond ETF (GRNB).

Something to note about green bonds is that this form of debt can be issued by both companies and governments. To the latter point, the market for green municipal debt is in the early innings of growth, pointing to potential with the VanEck HIP Sustainable Muni ETF (SMI).

The actively managed SMI debuted in September and “seeks current income generally exempt from federal income tax by investing in investment grade municipal debt securities that have been issued to fund operations or projects that support or advance sustainable development, as well as promote positive social and environmental outcomes,” according to VanEck.

The HIP Investments methodology that serves as the foundation for SMI is relevant at a time when there are increasing questions regarding environmental, social, and governance (ESG) scoring, particularly when it comes to fixed income.

“HIP Investor’s Ratings look deeper into actual results for citizens, beneficiaries and customers of the entities issuing muni bonds, as well as the use of proceeds in issuances. HIP Ratings grade on a 100 point scale. As muni bonds are typically issued by cities, counties, and states, as well as schools, hospitals, road authorities, energy utilities, and water utilities, the mission of these entities benefits citizens,” says HIP Investors founder and CEO Paul Herman.

“The ‘HIP’ in HIP Investor stands for ‘Human Impact + Profit.’ The HIP ESG ratings provide investors with impact analysis — and a measure of potential future risk. HIP brings 15 years of experience in rating the impact and ESG of 10,000 corporations globally across 85 countries, and nearly 10 years in rating Munis across 122,000 entities, over the U.S. geography of 3,100 counties and 50 states,” adds Herman.

SMI yields nearly 1% with an effective duration of 5.71 years, putting it in intermediate-term territory. Munis from California and New York combine for 57.5% of the new ETF’s roster.

“SMI offers investors current income that is generally exempt from federal income tax by investing in investment grade municipal debt securities that have been issued to fund operations that support or advance sustainable development, as well as promote positive social and environmental outcomes,” concludes Herman.