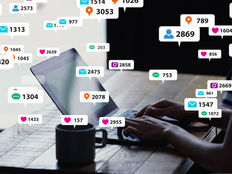 A couple years ago, the term “meme stock” was rarely acknowledged, and not many investors even knew what it meant. Thanks to technology and retail investors flush with cash, “meme stock” is meaningful vernacular today and could likely be more than a fad.

While the WallStreetBets movement is empowering to retail investors, the concept of an army of smaller retailer traders moving stocks like GameStop (NYSE:GME) and AMC (NYSE:AMC) isn’t free of controversy and has caught the eyes of regulators. That underscores the utility of a broad strategy, such as the VanEck Vectors Social Sentiment ETF (BUZZ C), for many investors that want to venture into the world of meme stocks.

One of the primary controversies involving meme stocks emerged earlier this year when digital broker and purveyor of the popular namesake trading app Robinhood (NASDAQ:HOOD) froze trades in GameStop, sparking harsh criticism among investors and drawing some regulatory review.

The Securities and Exchange Commission (SEC) last week published a report on trading in meme stocks, and it could provide benefits for both brokers and clients.

“The staff report did not provide firm or final guidance on changes to the regulatory framework or market structure, but the report is a good indication of its areas of focus,” says Moody’s Investors Service. “Any future regulations or related efforts that shorten the settlement cycle and increase market transparency would be credit positive for the retail brokers, central counterparty clearing houses (CCPs), market makers and exchanges that comprise the market infrastructure. Any future restrictions surrounding payment for order flow would be credit negative for those retail brokers and market makers that rely on the practice.”

For its part, BUZZ follows the BUZZ NextGen AI U.S. Sentiment Leaders Index (BUZZTR). That benchmark “is intended to track the performance of the 75 large cap U.S. stocks which exhibit the highest degree of positive investor sentiment and bullish perception based on content aggregated from online sources including social media, news articles, blog posts and other alternative datasets,” according to VanEck.

Another way of looking at BUZZ is that while it can hold meme stocks — AMC and GameStop are just two examples on the roster — it’s not dedicated to speculative fare because not everyone on social media and in the mainstream financial press is discussing meme stocks 24/7. In fact, BUZZ is home to some quality stocks, such as Amazon (NYSE:AMZN), Pfizer (NYSE:PFE), and Apple (NASDAQ:AAPL), among others.

For aggressive investors and those lured to BUZZ for meme stock exposure, the SEC recommends some steps that brokers can take to make this investing style less hazardous.

“Improved reporting on short sales would be credit positive for all participants. The staff report addressed the complex dynamics between short interest and stock prices, as well as the opacity about how firms cover their short positions,” notes Moody’s. “Increased reporting standards and transparency would enable market participants to better understand the causes of events like the “meme stock” frenzy, where dramatic increases in volatility could be linked to short selling.”