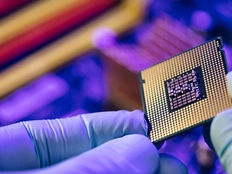 Semis Could Be Super Once Again in 2022

Fighting off an array of challenges, the VanEck Vectors Semiconductor ETF (SMH A-) is soaring in 2021, notching one of the more impressive performances among non-leveraged industry exchange traded funds.

As technology investors well know, that sector and myriad other industries are being hampered by global chip shortages this year, but that’s not restraining semiconductor share prices. Just look at SMH, which is higher by just over 34% year-to-date, as of Dec. 21.

Ahead of 2022, market observers are debating the outlook for semiconductor equities, and some consensus is emerging that while supply woes could ease, assets such as SMH may maintain upside potential.

“The semiconductor shortage and its impact on everything from autos to smartphone production has been much in the news. The shortage has been a boon for semiconductor stock prices. But it likely will resolve itself in the coming months—or years, depending on whom you talk to—raising the specter of a bust,” writes Charles Schwab’s David Kastner.

Good news for SMH components: Customers are desperate for more chips. That could be a sign that even as the supply situation eases, there won’t be a glut that sparks a bust cycle for chip makers.

The shortage “impacted all sorts of products from agriculture and heavy machinery to gaming consoles and smartphones. The auto industry’s problems are well-known, with automakers forced to halt production of many models and even cut back on electronic features like digital speedometers and infotainment screens,” adds Kastner.

Additionally vital to the SMH thesis is the ETF’s 13.7% weight to Taiwan Semiconductor (NYSE:TSM), its second-largest holding behind Nvidia (NASDAQ:NVDA). That’s one of the largest positions in Taiwan Semiconductor among all U.S.-listed ETFs. That company is the operator of the world’s largest chip foundry, making it a vital cog in the global semiconductor engine. Indicating that it has pricing power, TSM is likely to raise prices in 2022.

“The fabs are trying to catch up with demand, increasing production of the commodity semiconductors by 60%, in part by recommissioning retired equipment. But this will take time. Completing a chip requires nearly 700 steps, which can take as long as three months. At the end of October, wait times for chips and related components were between 22 and 38 weeks,” according to Kastner.

While the semiconductor space has endured boom and bust cycles in the past, it could be different this time as the supply issues ease. Innovative technologies, such as electric vehicles, will play parts in that outcome.