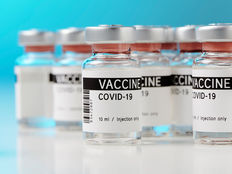 Plenty of countries around the world are catching up to the U.S. in terms of coronavirus vaccination rates, and it’s common for market observers to view that as a potential catalyst for economic and equity market upside.

This is a thesis that some are applying to India, which is already home to one of the best-performing equity markets in the world this year. Check out the VanEck Vectors India Growth Leaders ETF (GLIN), which is higher by 29.29% year-to-date — an absolutely dominating performance relative to what’s offered by the MSCI Emerging Markets Index. Signs are pointing to a robust resurgence in Asia’s third-largest economy.

“Two of the eight high-frequency indicators tracked by Bloomberg News gained speed last month, while five held steady and one slowed. The needle on a dial measuring so-called animal spirits, however, remained unchanged from the July level, as the gauge uses three-month weighted average to smooth out volatility in single-month readings,” reports Karthikeyan Sundaram for Bloomberg.

GLIN follows the MarketGrader India All-Cap Growth Leaders Index (MGINGRNR) and holds 82 stocks, many of which are considered growth fare. That could be a sign that the VanEck ETF is ideally positioned to capitalize on India’s rebounding and increasing vaccination percentage.

Speaking of the impact of COVID-19 vaccinations on the Indian economy and equity markets, there’s good news, but there’s also plenty of work to be done because the overall percentage of the country’s citizens that are vaccinated is low. As more get the vaccine and rates tick higher, GLIN could benefit.

“The monthly expansion in services and manufacturing activity coincided with relatively low new Covid-19 cases and a pick up in the pace of vaccinations — more than 834 million doses have been administered so far in the nation of 1.3 billion people. That said, less than a fifth of the population is fully vaccinated and risks of a third wave of infections persist,” according to Bloomberg.

GLIN allocates nearly 30% of its weight to technology stocks, a percentage that’s high relative to other single-country emerging markets, but one that’s reflective of India’s tech-heavy economy. That’s a plus for investors not only because it provides leverage to rebounding growth stocks, but also because some Indian tech stocks, like their U.S. counterparts, are considered quality fare. Healthcare and materials names combine for almost 49% of the ETF’s roster.