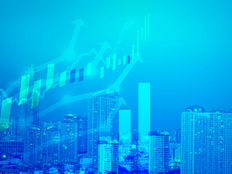 Why the Wide Moat Valuation Component Is Vital

The VanEck Vectors Morningstar Wide Moat ETF (MOAT B+) is beating the S&P 500 Value Index by about 200 basis points this year, indicating that there’s validity in considering the exchange traded fund as an alternative to pure value rivals.

On that note, it’s worth pondering how valuation meshes with identifying companies with stout competitive moats, which is what the Morningstar Wide Moat Focus Index — MOAT’s underlying index — attempts to do.

One element of blending value and moats that investors should be aware of is that the combination can lead to short-term underperformance. That’s been the case with MOAT in the current quarter, but value investing isn’t a short-term style. Rather, history indicates that it works best over long holding periods. That could be a sign that MOAT is undervalued today. Investors also need to consider sector attribution and exposure.

“A traditional attribution analysis can help identify the drivers of relative performance. When assessing the Moat Index’s sector exposure, its overweight and underweight to various sectors had little impact on relative performance compared to stock selection within each sector, which drove the majority of underperformance throughout the last several months,” says Brandon Rakszawski, VanEck senior ETF product manager.

MOAT holds 50 stocks, nearly 27% of which are technology names. The healthcare and industrial sectors combine for nearly a third of the fund’s weight. While technology and healthcare aren’t classic value sectors, there are some valuation opportunities in those groups, and both are home to plenty of names with deep competitive moats.

Currently, MOAT avoids richly valued tech names such as Nvidia (NASDAQ:NVDA) and Tesla (NASDAQ:TSLA), the latter of which is deemed to have a narrow moat despite being the largest electric vehicle producer. While some glamour stocks don’t always reside in MOAT, there’s no arguing with its index’s long-term track record.

“Many investors look to the Moat Index and its systematic strategy for core U.S. equity exposure. Despite unavoidable periods of underperformance, its batting average speaks for itself. The longer the time horizon, the better success the Index has had at outperforming the market,” concludes Rakszawski.

Over 116 five-year rolling periods between February 2007 and September 2021, MOAT beat the S&P 500 by 94%, according to VanEck data. Investors are displaying enthusiasm for MOAT, as it’s hauled in $1.98 billion of its $7 billion in assets under management just this year.