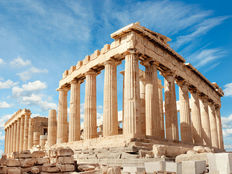 The Global X MSCI Greece ETF (GREK C), the only exchange traded fund dedicated to Greek stocks, is up more than 37% year-to-date, easily making it one of 2019’s best-performing single-country ETFs, but there may be some more upside left in the Greek fund.

The divided politics and a rise in populist sentiment dragged on Greek markets, but after a request by left-wing Prime Minister Alexis Tsipras to dissolve parliament, followed by a scheduled early national election, the country-related exchange traded fund is surging.

Part of the move in Greek markets is attributed to the populist discount, or the discount investors are required to hold Greek stocks under a populist government. Looking ahead, the new government is less likely to undo some structural reforms that have been undertaken in the past. Furthermore, the risk of higher labor costs, less labor market flexibility and an erosion of wage competitiveness would decline under a New Democracy-led government.

Recently, “New Democracy returned to power after more than four years in opposition with 158 out of 300 seats. The last Greek election that left one party commanding an overall parliamentary majority was in 2009,” said Fitch.

“New Democracy’s policy agenda includes corporate tax cuts, an acceleration of the privatisation programme and a commitment to reduce bureaucracy – measures that could boost investment. This would further underpin Greece’s economic recovery, as there is potential for significant pent-up investment demand across different sectors,” according to Fitch.