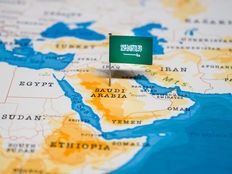 Saudi Arabia and its national oil producer are benefitting from surging oil prices. The country reported a budget surplus of $15.3 billion in Q1 as government officials curbed spending amidst flowing oil income. Bloomberg reported that total government revenue was 278 billion riyals, up 36% from the year earlier, while spending rose 4% over the same period to 220.5 billion riyals.

Capital expenditures has fallen 1% as the kingdom relies more on its sovereign wealth fund for projects and domestic investment. The boost was mainly driven by revenue from oil, which rose 58% from last year, as oil prices surged and the kingdom upped production.

In addition, Saudi Arabian Oil Co., also known as Saudi Aramco, on Sunday reported net income of $39.5 billion for the first quarter, an increase of 82% year-over-year and a new quarterly earnings record for the company since its IPO in 2019.

“Against the backdrop of increased volatility in global markets, we remain focused on helping meet the world’s demand for energy,” said Aramco CEO Amin H. Nasser in a news release announcing the company’s earnings results.

FLSA has seen its value increase more than 29% over the past year and more than 72% since its inception in 2018.