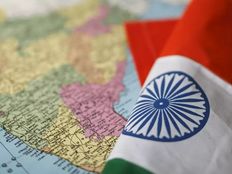 Invest in India Through This Single-Country Fund

While China is currently the largest emerging market, India may be poised to eclipse it. As The Balance notes, India’s rapidly growing population and strong economy could dethrone China’s position as the world’s biggest emerging market.

Known for its information technology and business process outsourcing, India also ranks second in the world in farm output and 12th in nominal factory output. In terms of purchasing power parity, India is ranked third globally. The country also has a young and educated workforce that’s growing faster than any other in the world — more than 85% of India’s population is below the age of 55.

India has averaged 7.5% GDP growth per year and has had average income per capita growth of over 500%. The country is also primed to see substantial growth in the digital sector over the next few years, with nearly 700 million people born between 1980 and the 2000s entering their peak consumption years over the next decade and boasting the largest Gen-Z population and fastest growing middle class of any major economy.

Plus, India’s longstanding parliamentary democracy and liberal economic policies make it a safer place to invest than many other emerging markets.

Investors seeking targeted exposure to large- and mid-sized companies in India at a low cost may want to consider the Franklin FTSE India ETF (FLIN C+).

Launched in February 2018, FLIN has 199 holdings and seeks to provide investment results that closely correspond, before fees and expenses, to the performance of the FTSE India Capped Index. The fund’s top holdings as of March 31 were Reliance Industries Ltd. (at 10.51%), Infosys Ltd. (8.25%), and Housing Development Finance Corp. Ltd. (5.08%).