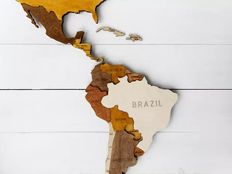 “Amid all the current volatility, Latin America may have some opportunities,” Alfonso Eyzaguirre, CEO of JPMorgan Chase Latin America and Canada, tells Reuters. “Some markets may be positively impacted by higher commodity prices, and also by a higher volume of investment flows by Emerging Market portfolio managers.”

While the MSCI All Country World Index was down more than 5% YTD as of March 31, its Emerging Markets Latin America Index was up more than 27%.

Latin America is also drawing in investor capital for the startups domiciled in the region. A report from the Financial Times notes that venture capital investment in Latin America’s companies more than tripled in 2021 to $15.7 billion, which data from the Global Private Capital Association show is more than the total for southeast Asia, Africa, and the Middle East combined.

Of that investor money, Latin America’s fintech disrupters brought in 39% of all investment flows, according to the Association for Private Capital Investment in Latin America. E-commerce drew in another 25% in inflows.

It also hasn’t hurt that the currencies within the region have been performing well this year. Those from Brazil, Colombia, Peru, and Chile so far being the best performing across emerging markets against the dollar.

Investors looking to invest in large and mid-size companies in the region may want to consider the Franklin FTSE Latin America ETF (FLLA ). The ETF has gained more than 12% year-to-date.