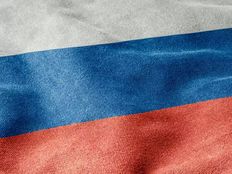 Russia ETFs Up as Moscow Signals Willingness for Talks

Russia country-specific exchange traded funds surged on Thursday after Moscow signaled that it was willing to engage in diplomacy with Washington, easing some of the recent geopolitical risk-induced selling.

The Russian rouble currency jumped, turning away from a near 15-month low in the previous session and extending gains after Russia stated that the idea of war with Ukraine was unacceptable, Reuters reports.

A Russian foreign ministry spokesman provided the latest official statement to assuage fears of an imminent Russian invasion, which Moscow has repeatedly denied.

“Based on what our (U.S. and NATO) colleagues said yesterday, it’s absolutely clear that on the main categories outlined in those draft documents … we cannot say that our thoughts have been taken into account or that a willingness has been shown to take our concerns into account,” Kremlin spokesman Dmitry Peskov said. “But we won’t rush with our assessments.”

While Peskov warned of U.S. and NATO statements that Russia’s main demands around post-Cold War security arrangements in Europe were unacceptable, he did not completely close the door on diplomacy.

“We think Russian assets would not sell off as much this time around, unless the worst-case scenario materializes,” according to strategists at TD Securities.

“We believe that the (central bank) is aware of these risks and, while likely downplaying them in official communications, may adjust the trajectory of monetary tightening to preempt future moves,” the strategist said, adding that they expect a 100-basis-point hike from the central bank next month.

In a sign that tensions may have begun easing on Thursday, Belarus stated that Russian troops would leave its territory once military drills were over.

“There was already active dollar selling since this morning, but the news from Belarus accelerated this process,” a dealer at a large Russian bank told Reuters.