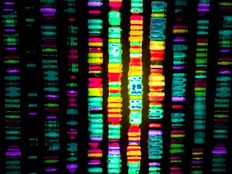 Use This ETF to Invest in the Fully Mapped Human Genome

Scientists have completed mapping the human genome. New research from the Telomere-to-Telomere (T2T) Consortium, a loose collaborative of about 100 scientists, shows that the team has completed a challenging 8% of the human genome left unresolved by the initial Human Genome Project.

The Human Genome Project originally unveiled a nearly complete rendering of our genetic code in 2003. But even then, it was known that it was only 92% complete. However, the T2T Consortium has now filled in that missing 8%.

CNBC has quoted Adam Phillippy, a computational biologist at the National Human Genome Research Institute and a leader of the effort, as saying: “It’s done, and it’s correct, and it’s been through all those levels of vetting. We’re optimistic there might be keys to human evolution and what makes us uniquely human.”

The news outlet added that researchers believe that advances in genomic sequencing technology could “help scientists better understand how humans evolved particular traits” and lead to “a renaissance of medical breakthroughs.”

Those looking to invest in the theme of genomic advancements may want to consider the actively managed Franklin Genomic Advancements ETF (HELX B-). One of three actively managed thematic funds launched by Franklin Templeton in February 2020, HELX invests in companies that stand to benefit from advancements in genomic-based research techniques and technologies.

Since its inception, HELX has grown more than 51%.

The fund seeks capital appreciation by investing in equity securities inside and outside of the U.S., including developing or emerging markets. The $27 million ETF had 57 holdings as of December 31 and included Repligen Corp., Intellia Therapeutics Inc., and Thermo Fisher Scientific Inc. among its top holdings at the time.