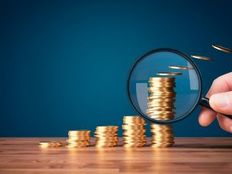 Zero In On FLHY as a Recession Indicator

Among fixed income assets, high yield corporate bonds are often considered to be reliable indicators of economic strength or weakness.

With that notion in mind, the Franklin High Yield Corporate ETF (FLHY A-) could be a relevant near-term idea for income-hungry investors. The reasoning is simple. While there’s ample debate questioning whether the U.S. economy is in a recession or nearing one, the high yield debt market says otherwise.

“But for now, investors are voting with their dollars. High-yield bonds gained 5.9% in July, their biggest one-month rally in a decade, and have also been rising in August, according to Bloomberg index data,” reported Olivia Raimonde for Bloomberg.

Adding to the case for junk bonds is that some of the riskier corners of the landscape are showing signs of life.

“Riskier parts of the credit spectrum are also showing some concern. CCC rated bonds, among the lowest-rated corporates, gained 4.95% in July, while BB securities, the top tier of high yield, rose 6.1% on a total return basis,” according to Bloomberg.

FLHY holds 189 bonds, of which 8.73% carry CCC ratings. Over 84% of FLHY’s holdings are rated BB or B, but the fund is actively managed, indicating that it’s not constrained to particular credit grades. As such, the managers can look for value in higher-rated corners of the high yield space or pare exposure to riskier debt as needed.

Another advantage of FLHY being actively managed is that, unlike many index-based rivals, the Franklin Templeton fund can take stakes in bonds that were recently downgraded to junk status. Those bonds are also known as fallen angels and, on a historical basis, they have better quality and performance traits than corporate debt born with the high yield label.

As for recession protection, FLHY may not be fully immune to economic contraction, but history shows the asset class probably isn’t pricing in a recession as of yet.

“Between December 1996 and December 2021, there were 28 months when the economy was in recession, according to an analysis by Martin Fridson, chief investment officer at Lehmann Livian Fridson Advisors. The median junk-bond spread during those months was about 835 basis points, or 8.35 percentage points, based on ICE BofA indexes. That spread is currently closer to 460 basis points, around the median level for non-recession months, according to his analysis,” noted Bloomberg.