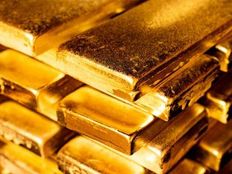 Western nations continue to pour sanctions on Russia with an emphasis this time on banning gold imports to further cripple its financial system. This could give gold prices an added boost as supply out of Russia is cut off.

“Russia, one of the world’s biggest producers of gold, cranked up the mining of new gold to compensate for some of the paralyzed assets, Christopher Swift, a national security lawyer at Foley & Lardner, said,” the New York Times reported.

It’s the latest in Western sanctions allied with Ukraine after prohibiting most trade with Russia following the country’s invasion. Additionally, hundreds of billions of dollars in assets belonging to the Bank of Russia were frozen.

Now, Western nations are going after Russia’s gold imports. Gold prices have been in somewhat of a holding pattern as of late after the U.S. Federal Reserve hiked rates 75 basis points recently.

This latest move could push prices of gold higher if demand can stay static or move higher with a dwindling supply coming from Russia.

“The Bullion Market Association in London, a major hub of the global gold trade, had already suspended transactions with six Russian silver and gold refineries in March,” the New York Times added.

Physical Gold Exposure Wrapped in an ETF Investors interested in getting gold exposure that’s physically-backed can take a look at the abrdn Physical Gold Shares ETF (SGOL A). The fund seeks to reflect the performance of the price of gold bullion. Fund facts per SGOL’s fact sheet: