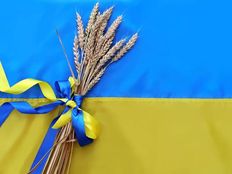 Ukraine and Poland are working feverishly together to stop the bleeding on rising wheat prices. According to a Wall Street Journal report, Ukraine’s wheat harvest is only weeks away, applying more pressure on ensuring that wheat exports are released unhindered.

It won’t be an easy task for both nations to accomplish given the Russian navy’s death grip on Ukraine’s harbors. Still, Ukraine and Poland are exploring ways to work around this major issue.

The latest developments reveal that there could be a shimmer of light at the end of the tunnel. Russian President Vladimir Putin, via negotiations with Polish President Tayyip Erdogan, could open the pathways for exports to exit Ukraine.

As mentioned, this is especially crucial with respect to wheat exports. Ukraine accounts for 10% of the world’s wheat, making the economic forces of supply and demand a primary mover of the commodity’s price.

“During the discussion of the situation in Ukraine, emphasis was placed on ensuring safe navigation in the Black and Azov seas and eliminating the mine threat in their waters,” the Kremlin said of Putin’s call with Erdogan, according to a Reuters report.

“Vladimir Putin noted the readiness of the Russian side to facilitate the unhindered sea transit of goods in coordination with Turkish partners. This also applies to the export of grain from Ukrainian ports.”

Of course, actions speak louder than words, and until then, prices of commodities will continue to climb. As such, it’s an opportune time for investors to hedge against inflation with commodity-focused exchange traded funds (ETFs).

One particular fund to consider is the Teucrium Wheat Fund (WEAT C), which provides exposure to wheat futures contracts. The fund is up over 40%, speaking to the rise in wheat prices as the geopolitical forces surrounding the Russia-Ukraine conflict continue to play out.

WEAT can give investors uncorrelated assets in order to complement a portfolio with basic exposure to stocks and bonds. As investors and advisors are well aware, both assets have been heading downward for much of the year, so getting exposure to commodities has been an opportune hedging play for portfolios that have them.