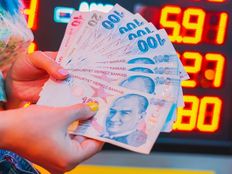 As Turkey's Lira Falls, Bitcoin Could Be a Rescuer

Rampant inflation is once again plaguing Turkey’s local currency, the lira, but one saving grace could be its citizens using bitcoin to supplant the plunging fiat currency.

The decentralized nature of cryptocurrencies has been able to help stave off the decline of the lira, which hit a new low in the month of December. As Forbes reports, Turkish households have witnessed the lira decline about 30% within the past month.

Bitcoin itself has faltered this month, dropping below $50,000 recently after hitting a new high in October. The bullish optimism was fed by the introduction of a bitcoin futures-based ETF in the U.S.: the ProShares Bitcoin ETF (BITO).

Nonetheless, despite the latest drop in the leading cryptocurrency, the inherent decentralization component could be a boon to Turkish consumers.

“As a decentralized asset, Bitcoin is precisely the kind of asset (Austrian economist Friedrich) Hayek may have had in mind. It’s not issued by, nor does it belong to, any government. No central bank controls it,” writes Frank Holmes for Forbes. “It’s completely border-agnostic. I can no longer send money to someone in Cuba using Western Union since operations ended there last year. But Bitcoin? No problem.”

“What’s more, Bitcoin has been a fabulous store of value compared to traditional currencies such as the Turkish lira and even the dollar, whose purchasing power has steadily deteriorated since the Federal Reserve’s founding in 1913,” Holmes adds.

“The data shows despite the instability faced by the lira, local traders are still attracted to the exceptional returns associated with coins such as SHIB,” said Strahinja Savic, head of data and analytics at Toronto-based crypto platform FRNT Financial.

Another way to get alternate exposure to bitcoin is to play its future price increases. As such, exchange traded fund (ETF) investors may want to play on this bullish notion with Proshares’ BITO.

Investors who can’t stomach the volatility that’s hit bitcoin as of late but still want alternative asset exposure to the leading cryptocurrency will want to give the fund a closer look. Additionally, bitcoin’s price of around $50,000 may not fit everyone’s budget, but BITO can provide alternate exposure at a lower price of entry.