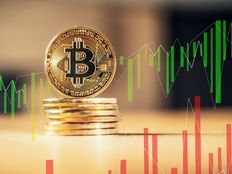 Transactions on the centralized bitcoin exchange have been their highest levels in months for both the ruble and the Ukrainian hryvnia ever since Thursday, when the Russian invasion of Ukraine began.

“Volume for both RUB and UAH trading pairs increased far more quickly than volume for other pairs, such as BTC-USD, which suggests the crisis is directly influencing trading behavior,” according to crypto data company Kaiko.

Recent events highlight some of the humanitarian uses for cryptocurrency. The Ukrainian government has raised more than $10 million in cryptocurrency donations. “Cryptoassets such as Bitcoin have emerged as an important alternative crowdfunding method,” Tom Robinson, Elliptic’s chief scientist, wrote in a blog post on Sunday. “They allow quick, cross-border donations, which bypass financial institutions that might be blocking payments to these groups.”

Calls to Freeze Russia out of Crypto

Amid concerns that Russia could sidestep some sanctions through cryptocurrency, Ukraine Vice Prime Minister Mykhailo Fedorov has asked exchanges to freeze Russian crypto accounts. Binance, one of the largest crypto exchanges, said that it had no plans to freeze Russian accounts.

“We are not going to unilaterally freeze millions of innocent users’ accounts. Crypto is meant to provide greater financial freedom for people across the globe. To unilaterally decide to ban people’s access to their crypto would fly in the face of the reason why crypto exists. However, we are taking the steps necessary to ensure we take action against those that have had sanctions levied against them while minimizing impact to innocent users. Should the international community widen those sanctions further, we will apply those aggressively as well,” a Binance spokesperson told CoinDesk.

Jesse Powell, founder of crypto exchange Kraken said on Twitter that his exchange won’t freeze accounts “without a legal requirement to do so,” but noted that “Russians should be aware that such a requirement could be imminent.”

He added that Kraken FX’s mission is “better served by focusing on individual needs above those of any government or political faction” and that "the people’s money is an exit strategy for humans, a weapon for peace, not for war. If we were going to voluntarily freeze financial accounts of residents of countries unjustly attacking and provoking violence around the world, step 1 would be to freeze all US accounts. As a practical matter, that’s not really a viable business option for us.”