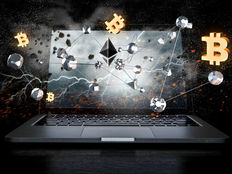 It’s been a stellar year for not just bitcoin, but for cryptocurrencies as a whole in 2021, with the entire market adding $1.5 trillion in value.

The introduction of a bitcoin futures exchange traded fund (ETF) from ProShares certainly had a hand in that rise, helping to provide a veil of legitimacy to the cryptocurrency space with traditional finance pundits. While it’s still trying to gain traction in traditional capital markets, institutional investor interest has grown exponentially with more money flowing into the space.

With bitcoin being the rising tide that lifts all boats, other coins in the crypto space got a share of the spotlight as well. Ethereum, with its ever-expanding use case, also reached an all-time high with bitcoin, while meme coins like dogecoin and shiba inu also attracted interest with their strong social media presence.

“Bitcoin, up more than 60% this year, absorbed much of the attention but had to share more of the limelight with the likes of Ether and Binance Coin as well as meme tokens such as Dogecoin and Shiba Inu,” a Bloomberg article notes.

“The overall market value of cryptocurrencies climbed by about $1.5 trillion in 2021 to some $2.3 trillion as of Dec. 17, according to tracker CoinGecko, which counts almost 12,000 tokens,” the article adds.

The article also notes that the Bloomberg Galaxy Crypto Index jumped over 160% in 2021, which ousted other traditional assets like stocks. In comparison, the S&P 500 is up about 26% heading into the final days of what’s been a bullish year for cryptocurrencies in general.

Getting Exposure to Rising Bitcoin Prices

Bitcoin’s recent fall from its all-time high allows bitcoin futures-focused exchange traded funds (ETFs) to buy the dip. That said, investors who want to bet on future bullishness in the leading cryptocurrency will want to look at the ProShares Bitcoin ETF (BITO).

Investors who can’t stomach the volatility that’s hit bitcoin as of late but still want alternative asset exposure to the leading cryptocurrency may want to give the fund a closer look. Additionally, bitcoin’s price of around $50,000 may not fit everyone’s budget, but BITO can provide alternate exposure at a lower price of entry.